Images and Realities of Poverty in 1920s Exeter 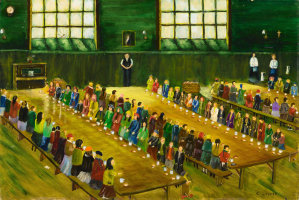 Julia began her talk by dedicating it to our Chairman, Chris Gale, who died in January.  Chris had talked to her in the past about his family who lived on Shilhay, his grandfather who drove a horse and cart at a timber yard, and a grandmother who lived in Rack Street.   Thinking about their lives had resonated with the research that she had been involved with relating to the West Quarter of Exeter in the 1920s.

She opened her talk with Charles Tucker who painted heart-rending pictures of life in the 1920.   Born in 1920 he attended the Mint Methodist School where some boys brought their own paints.  Sadly, his family on £2.4s a week wages had not enough to spare for a tin of Reeves paint which cost, he was told, as much as a pair of boots.  His evocative paintings show life in the 1920s when he was just a small child so they must be recollections looking back on earlier memories.

Offering breakfast before school to children was first suggested in 1902 by General Booth of the Salvation Army.  A farthing was the smallest coin and the idea was to accompany it with a fund-raising initiative asking people to donate their farthings.

In the painting above one can see that breakfast is held in a religious building where there is a crucifix and a piano suggesting hymns would be sung.  It is a Mission Hall which could accommodate about 200 or 250 people.   The children in the picture are standing, probably waiting for grace to be said before they address the mini loaves and cocoa.  There are three adults in the painting – the caretaker, Mr Brown, a woman, probably a teacher, and Ellen Tinkham, who was the daughter of the couple who started the Farthing Breakfasts in Exeter.  She later became a councillor

The farthing breakfast initiative was set up by a Salvation Army couple, Mr & Mrs Davey who ran a cycle shop at 156 Cowick Street.  Every child’s farthing didn’t cover costs so donations were sought and expressed in farthings.  But, the subscriptions were never enough and the Davey family found they were funding the breakfasts themselves.  Fortunately a local banker joined them and his organisational skills led to their receiving donations from Post Office staff, church collections and even from abroad.  When their daughter, Ellen Tinkham, took over she turned it into an official charity.   The farthing breakfasts were estimated to have helped 125 families with approximately 389 children.

The breakfasts did not provide food on Mondays as it was considered the families would have food left from the weekend!  They also investigated the children’s families but found they were certainly poor enough to qualify for the breakfasts -75% of the fathers were out of work. The meal consisted of two thirds of a loaf with butter and one with jam and the children could have a refill of cocoa.

The Soup Kitchen was a different food charity.  Located in the basement of the Lower Market it only operated when the temperature dropped below freezing.  Because the weather during the 1920s was often above freezing it didn’t always open but 1929 was very cold and its opening was heralded with a cheer as workers ladled out thirty gallons of pea soup costing a penny a pint.  People were expected to bring their own utensils in which to collect the soup.    This was not an economic price but the balance was cleared by subscriptions.

Charles Tucker’s water colour  of the public wash house which stood at the end of King Street can be seen  using the link Charles Tucker: Poverty and Charity in 1920s Exeter - Royal Albert Memorial Museum & Art Gallery (rammcollections.org.uk).  Local philanthropists, who saw cleanliness as a great need to prevent a repeat of the dreadful 1832 cholera outbreak, raised funds for the provision of these public baths and the wash house.   These were eventually taken over by Exeter City Council.

Washing clothes in the West Quarter was difficult.  Some people had coppers to boil water while others sent their washing to be done for them at 5d per load.  Others took it to the wash house themselves.  Many were employed as washerwomen in better off houses and were recorded as laundresses on the census.

Charles Tucker’s father was a builder’s labourer and an army pensioner.  He had enlisted for WW1 at 17 and sent out to France where he was soon treated for “pyrexia of unknown origin” - probably post-traumatic stress disorder.  He was given a labouring role until discharged in 1919.   He married Edith Wingfield in 1920 and when their son Charles was born they were living in one room on the second floor of a Tudor house on the corner of Stepcote Hill.  Their room was accessed from the back of the house through an alley off Stepcote Hill called Parsonage Place, (which had the house’s communal lavatory).

Towards the end of the 1920s, anticipating that their home was to be demolished (it wasn’t), the family moved to a tenement in Preston Street with a front room, a kitchen and two bedrooms.  This was not a great improvement as they still had to share the tap and the w.c. and from their window could watch rats running along carrying rabbit skins in their mouths.  Mrs Tucker became pregnant again in the 1930s and that’s how they came to be rehoused in Burnthouse Lane . 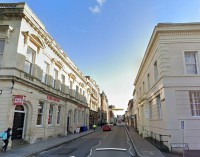 The 1920s saw very high unemployment.  Money was available for a few weeks for those out of work and it was then possible to draw the new dole – a national statutory payment in recognition of so many who had fought in the war and needed something to survive.

During the 1920s men were frequently laid of.  This led to long queues at the Labour Exchange in Queen Street (the building on the left of this picture). Charles remembered particularly long queues before Christmas when the men were often laid off because of bad winter weather.  Charles’s father was at that time employed building the new council house estate at Polsloe and he had his little war disability pension so his family were not starving; probably they had sufficient food because of his pension .

The building on the right of the picture was the Exeter Dispensary.  When Charles became ill his mother, suspecting a stomach bug, took him to the Dispensary where the doctor diagnosed polio.   Charles was quoted as saying “They put me on electro massage.  If mum had left it another two days I’d have been in a wheel chair”.  He remembered that much later in the Princess Elizabeth Hospital he was given ultra violet treatment and encouraged to climb up bars.  Perhaps it was because of his illness that he became, as exemplified in his paintings, such an acute observer.

Being poor restricted access to medical services.  If you were really poor and had not built up your National Insurance contributions you could get free advice from the Dispensary.  As Charles’s father only received £2.4s.0d (plus eight shillings) his family were able to claim free treatment. 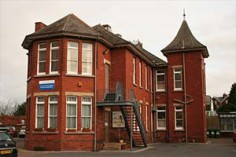 If a family had been without enough money for too long they might have had to go into the workhouse, run by the Poor Law Guardians, something local people always dreaded. Charles remembered neighbours, an old couple, having to go to the workhouse.  A horse and cab were sent to collect them. They sold most of their possessions and gave what was left to their neighbours who were in tears. The old man also was crying.  When they got to the workhouse the couple were separated which was a horrifically sad end to their lives.

Other sources of help for the poor were ecclesiastical charities associated with churches such as St Mary Steps in the West Quarter, St John’s on Fore St and St Mary Major on Cathedral Green which had a daughter church, both now demolished. An example of those ecclesiastical charities’ work was that at St Mary Major the church wardens had £25/year to distribute as charity.  Five people were given twelve loaves per week.  Perhaps they could swop the loaves for something else.

The City of Exeter was also a source of help for the poor. Grateful citizens had left legacies which were subsequently rolled up into Exeter Municipal Charities to support almshouses for the elderly and provide education grants for young people.  The Mayors presided over other charities. In 1922 Mayor Rowsell supported the Exeter Cancer fund to buy radium while Mayor Michelmore in 1932 supported the Church Army Housing Scheme.  And the tradition of the Mayor’s poor box provided small grants to needy people - though sometimes this was used to pay the rail fare to get troublesome people out of town!

There were also many secular charities dating back to the Victorian era.  There was a Police Fund for boots, the Exeter Blanket Society and a Lying-in charity.  Other charities provided food for the poor and the Penny Dinner Society provided  the aged and infirm with a hot 2-course meal of meat, two veg and a pudding every Monday.

Charles Tucker had shown an interest in painting from an early age even though there was no money available for him to buy a much coveted box of Reeves paints. When he retired he recorded the memories of his childhood with accounts of going out into nearby countryside fields to pick wild daffodils and of bats and owls flying down Frog Street.  He used his memories of his younger days to put on record in his paintings the different aspects of life for the poor in Exeter in the 1920s.