Tradition, said Dr Todd Gray, is what you think it is…  In the 1850s up to 20,000 people gathered in Cathedral Close every 5 November for a parade with great noise and effigies to be burnt.  Nowhere else in the South West were there such regular demonstrations. 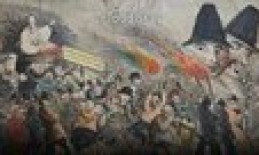 They were actually funded by men who used the event to show their intense dislike of High Church Anglicans who, they felt, were getting to be “too Catholic”!   Young men and boys were plied with food and drink to stir up the proceedings which were not specifically about religion as such but were also about people they hated.  Anyone they didn’t like was targeted along with all the Catholic bishops.

They particularly despised Bishop Phillpott so for fifty years they arranged for him to be burnt in effigy. Meanwhile, the Rev. Ingle of St Sidwell provoked a riot because he had worn a surplice and another vicar, the Rev. Rook, was portrayed in effigy because of his reputation involving the number of children he had fathered with several serving maids.

Later in the month was Elizabeth Day (celebrating the new queen) with a bonfire on 17th November.   James Ist carried on the celebration of this date although it it was later subsumed into the 5th November bonfire celebrations of Guy Fawkes - though Axminster went back again to celebrating 17 November.  Some towns even celebrated both days.

We were shown images  of the Guy Fawkes mask which has now become a symbol of anarchy worn through the world particularly for protest marches – such as in Hong Kong.  In the past twenty or so years Guy Fawkes and Halloween have become merged and the connection with blowing up parliament has been largely lost.  One no longer hears children requesting “a penny for the Guy”.  It has been replaced by “Trick or Treat”.  Traditions change!

Todd felt that what is relevant as a tradition today often depends on how old you are and that 18-year-olds would say Christmas lights are traditional.  In fact they only date back to the 1970s and 80s while the Boxing Day sales spree has been taken over by Black Friday.  The 3pm Queen’s Speech, now a tradition, didn’t even exist in the 1930s! 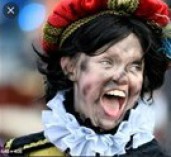 Plymouth has a strange tradition with “Black Peter”.  These days condemned as racist, it is an old Dutch tradition and is kept going in this country even though they have stopped it in Holland.  It involves a white boy being blacked up although these days there are just a few daubs of black on the child’s face.

In the medieval period there were Christmas plays in churches.  Todd explained about Hogners (1480-1622) being seen in Chagford, Exbourne, Molland, Ashburton and Ashbury.  This involved men dressing up and singing, performing and going from house to house to collect money for the church.  This was then considered as old fashioned and the Puritans stopped it.  In the Elizabethan period a Broadclyst man objected which landed him in court.

On Christmas Day the Vicar at Totnes was observed being drunk at 6am having divested himself of his clothes and danced down the street.  At Alverdiscot a woman was seen “occupied” under a furze bush, and in Brixham a man had relations with a girl and she became pregnant.

Todd went on to talk about religious images in churches and showed pictures of painted glass in Hartland Church and a diorama from Plymstock.  This is now in the RAMM with an image of the Crucifixion.  He showed images of carving, and painted screens in Buckland on the Moor and Crediton Church, plus a Cornish carving.  In the Seventeenth Century Christmas was seen as a time for prayer and contemplation.  There were more images of a Dutch carving at Holcombe Rogus, plus an Exminster carving and a wonderful ceiling (still there) in a bank in Barnstaple.

An idea of Christmas purchases by the large houses of Devon can be seen in household accounts of 1620-1630.  An example was the ingredients bought for making the pudding, plus a list of all the days of celebration showing all the people who attended each day.  Another list showed the vast amount of food that was consumed on Christmas Day.

We were delighted with another household account showing the food that was consumed by (only) 30 people one Christmas day.  The purchase of figs, dates, raisins, chickens, beef etc was magnificent.  Though Todd reminded us that this was the only day in the year when the poor had more than enough to eat – perhaps the only day when they had any meat at all. 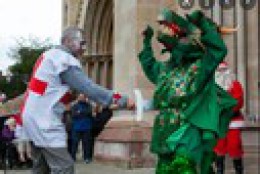 In due course pantomimes succeed Mummers with scantily clad females and then were replaced by the Minstrel Plays and, in more recent memory, the Black & White Minstrel Shows.

There is less recorded evidence of how the Georgians celebrated the festival.  Christmas trees were in use but only really became fashionable later in Victorian times.  Fir trees covered in flour were popular.  They also invented Stir-Up Sunday when each member of the family takes a turn in stirring the Christmas pudding  whilst making a wish on the last Sunday before Advent. There is  a account written in 1720 of Exeter in the Georgian era by Andrew Brice.

The Victorians initiated what we consider to be traditions including mistletoe – though there was none in Devon at that time - and the Boxing Day Hunt. Christmas cards showing the Hunt became popular and there were also home-made cards and topographical cards – like those showing the Guildhall (see left).  Christmas trees were first displayed in institutions and asylums.

What we regard as traditional has a lot to do with Dickens as the whole Victorian concept of Christmas changed due to him.  Todd showed images of markets with much produce on display - more meat on display in the markets as the Victorian era became more successful.  Devon ballads became increasingly popular with Uncle Tom Cobley and Widecombe.

Todd showed an image of the front covers of four books he had written about Victorian stories of Christmas in Devon including tales that had been gleaned from local and national newspapers. For instance, one told of an undertaker who invited all of the people he had made coffins for to come back for a party. 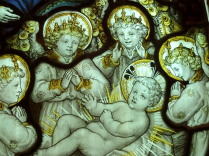 The Victorians brought back stained glass to replace what the puritans and the Georgians had smashed and these included using real models with recognisable faces.

In the 19th century it became fashionable to present institutions and asylums with gifts for residents such as socks or an orange and a century ago Harry Hems would provide a Christmas meal for 100 people – often their only meal of the celebrations.  From the 1860s onward stories by local people were published in the  newspapers.  In Heavitree ghost stories were popular.

on 21 December (St Thomas's Day) the poor visited the houses of the better-off requesting food and/or provisions to help them through the winter. It was called A-Thomasing and was a regular feature of rural life until it gradually declined through the 19th century—although it continued in Cornwall until the 1930s.

We were shown a slide featuring mumping terms for different parts of the country.  This involved “Going a gooding” in Devon and Somerset - begging for money to provide for Christmas.  In previous times a feast was provided by the Lord of the Manor for his villagers, and in Exeter Christmas boxes became a tradition for those tradesmen who served the general public and whose wages were insufficient to buy what was needed for a Christmas meal.

Nowadays we all have so much food and it is plentiful and available all year round.  Christmas is no longer the one opportunity to provide a celebratory feast.  Instead it is seeing people we love that is important and lockdown has certainly brought home to us all how important that is.    We no longer need a new pair of socks but we do need to see our friends and relatives.  That is the point of Christmas today. 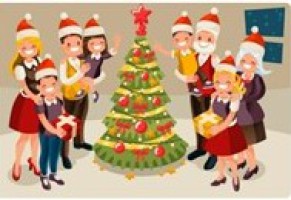 Thanks to Sue Jackson for her input on this summary