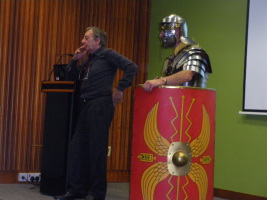 John Salvatore's talk focussed on a small but very significant period of Exeter's history - the Roman military period - which lasted only from about 55AD, with the arrival of the Second Legion Augusta, to 75AD when the legion departed for a new base in South Wales at Caerleon.
John explained that the Second Legion were one of the four legions which invaded Britain in AD43 in order to give the new Emperor Claudius a military victory.  The Second Legion, commanded by the future Emperor Vespasian,  is known to have campaigned across the south and captured Maiden Castle in Dorset.  But by the time they arrived in Devon to establish a legionary base overlooking a crossing of the River Exe, Vespasian had returned to Rome.
John went on to describe how the remains of a stone-built  Roman military bath-house, excavated in front of the Cathedral in the 1970s and the remains of timber legionary barracks found at the Guildhall Shopping Centre site, had proven the site to be a Legionary fortress constructed in the uniform pattern of the time with the timber barracks surrounding the administrative buildings and the bath-house in the centre. The whole thing was defended by a circuit of a ditch and rampart.
He explained that the legion would probably have remained at Exeter had they not been transferred to Wales in AD75 when the legionary strength in Britain had been reduced to 3 Legions.  A tile-maker attached to the  Legion travelled from Exeter to Caerleon where a tile from the same mould as an Exeter example was found.  Whilst there are no Second Legion inscriptions from Exeter they are plentiful from Caerleon and the tile connection seems certain to indicate that it was indeed Second Legion Augusta who were based at Exeter.
John went on to talk about the as yet unpublished Roman military period site excavated in 2010 at the former St Loyes College on Topsham Road.  This site appears to have been a settlement run by civilians who traded imported goods from Gaul (via Topsham) and also engaged in metalworking. Copious amounts of broken amphora suggest the importation of wine and probably fish sauce.
The 'surprise' element of the talk was John's suggestion that the non-appearance of the Legion in the battle against the Boudican rebels in AD 60/61 despite having been ordered up country - was the desire of the Camp Prefect (Poenius Postumus) to defend the settlement at St Loye's and all of the Roman infrastructure between the fortress and the suspected port at Topsham from the threat of local insurrection.  Boudica had been able to enter the former legionary base at Colchester unopposed as the defences had been thrown down when the legion left - leaving the civilian population at the mercy of Boudica.
The local Dumnonii, embolden by news of this event, could have taken advantage in Exeter.
However, what appear to be emergency defences were thrown up at St Loyes and at another civilian site just outside the fortress. These were military style defences almost certainly the work of the legion.  Although Boudica was defeated without the help of the Second Legion, Poenius, the Camp Prefect, was reported by Tacitus to have fallen on his sword as he had denied the legion the battle honours which were awarded to the XXth and XIVth legions.
Potentially, his decision may have saved thousands of lives in the south west as well as the newly constructed bath-house which may well have been completed or near completion by the year of Boudica's revolt.
The theory is hypothetical but what is beyond doubt is that at some stage between 55 and 75 AD defences were thrown up around those non-military sites which were in close proximity to the fortress. Whilst it could never be proved with absolute certainty, the Boudican revolt of AD 60/61 fits neatly within this time frame and if the SW was perceived to be not fully Romanised then the threat of a local uprising could have been enough to sway Poenius' decision-making, irrespective of the consequences of disobeying a military order.

INTERESTING NOTE: The soldiers referred to the city as "EXE CASTRA" after the river Exe and Castle.  This name, over the centuries became reduced to "Exe Tra" and eventually, of course, "Exeter".