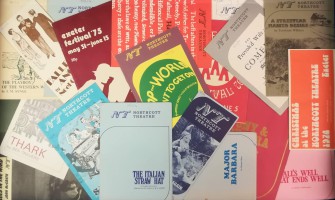 Exeter’s Theatre on the Hill

(This event was scheduled for 11 June, then postponed to 24 July 2020 and finally cancelled because of the pandemic)

A short summary of the proposed talk is below.

The Northcott Devon Theatre and Arts Centre opened on 2nd November 1967 with a production of The Merchant of Venice, starring Tony Church, its first Artistic Director, as Shylock.

The abolition of stage censorship in 1968 enabled greater freedom of production and this was reflected in the theatre’s artistic direction. The 1972 production of Howard Brenton's 'Measure for Measure' set in a strip club was widely castigated as seedy and many other productions were seen as ‘challenging’ by more traditional audience members.

Early directors fostered new writing talent at the theatre and many, now famous, young actors received their start in the rep company.

Its archive holds a treasure trove of material and, in 2018, Archivist Caroline Walter was appointed to conduct a two-year cataloguing project to make this material more accessible.  She has brought to light a unique collection of photographs, posters, programmes, stage plans, prompt books, press cuttings and much, much more.

Ambitious staging, disapproving critics and misbehaving animal co-stars can all be found in the archive, along with enchanting images featuring fresh-faced young actors, such as Robert Lindsey, Imelda Staunton, and many others. Perhaps you may even spot yourself among some of the Community and youth productions!

We will join Caroline for an exploration of many of the archive’s treasures and learn more about the National Lottery funded project.  This will allow Exeter communities to delve into this rich history, its stories and voices and also to expand the archive by generating new memories.