St Pancras in the Middle Ages

On Thursday, 11 March 2021, John Allan told us - via Zoom - that he had undertaken work on the parish as part of the “Exeter, A Place In Time” project" (Exeter University, RAMM) which was to complement the archaeological work done in the area by looking at documents held in the archives. Apparently Exeter has an exceptional collection of documents relating to property, such as sale contracts. Although properties were not numbered in the past it was possible to pinpoint the properties concerned because they are referred to in contracts as "adjacent to the house of Joe Bloggs…”. John Allan has thus been able to draw up ownership maps through time.

He showed how the footprint of properties in the parish changed little over the centuries, apart from where there was compulsory purchase by the local authority for the Guildhall Centre development. So this is mainly true of the part of the parish on which he concentrated. But he said that he has found the same level of details for some of the less expensive properties on the north side of the parish, particularly if they were let out to tenants.

It was surprising to learn that some of the owners/tenants of the “best houses” - those on the High Street - actually lived in very small apartments within them, despite some of them being very wealthy.  People only paid a rate on the house they occupied.

Some of the buildings had been bequeathed to the Cathedral and were then leased to private individuals such as Joan Tuckfield a wealthy Exeter widow of the 16th century. Her husband had been John Tuckfield, Mayor in 1549-50, and her will established several local charities. Her portrait is held in the RAMM. 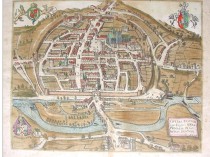 John used early maps and plans such as the famous Hogenbaum & Braun Map from 1617 to show the layout of streets and buildings.  Most of the streets are still there and often the buildings.

Parliament Street was there in 1660 and actually goes back to the 13th Century (when it was called Busse Lane).  John highlighted some of the earliest occupants of

the buildings in the parish.

He showed us pictures of the backs of the High Street shops in Waterbeer Street and told us of a very revealing pile of very old documents in the Cathedral Archives which listed, for instance, that the last tenant in 196 High Street was John Hill in 1819.  In 1660 it was the home of Elizabeth Flay (she of Flay’s Almshouses Pinhoe Road – pictured below) and her rent was £2 6s 8d. 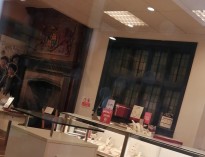 A visit to the jewellers H. Samuel’s at 23 Waterbeer Street (adjacent to the Guildhall Shopping Centre entrance) is highly recommended for it contains a stunning overmantel and a window dating from the time of Elizabeth I. The shop was originally a wealthy Tudor merchant's house.

John told us anecdotes about the various residents of St Pancras, for instance:

The medieval accounts of Exeter cathedral record that "Master Walter the Glazier" was paid for work which included the Great East Window. The window is one of the treasures of the cathedral. It had been thought that the 1304 stained glass in the window was imported from France by the cathedral authorities, and that Master Walter merely fitted the panels. John was able to tell us that it is now known that Master Walter lived and had a workshop in North Street, so he may have been responsible for designing, painting and fitting the stained glass. His house and workshop is now the brick wall of the Guildhall Shopping Centre. 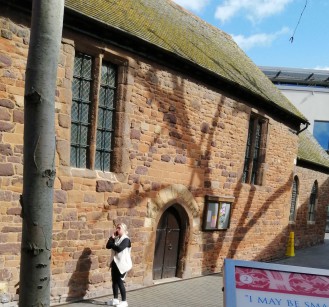 St Pancras Church is situated in the middle of the Guildhall Shopping Centre in Exeter. The majority of the church dates from the thirteenth century, although the font is eleventh century. It probably occupies the oldest Christian site in Exeter.

Certainly, we will look now at the whole St Pancras area with new eyes now that we appreciate that so many of those old buildings are still there but have been added to and changed almost beyond recognition.