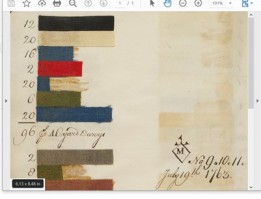 On Thursday, 8 April 2021, Dr Todd Gray told us about a recently-discovered Exeter manuscript containing 2,475 swatches of Exeter cloth made in the 1760s.

For many hundreds of years cloth making had been Exeter’s principal industry. Fleeces were carded, combed, spun, thickened, cleaned and beaten and the cloth was then spread out on tenterhooks to dry.  Paintings from those days show wool cloth drying on tenterhook racks everywhere – they even hung cloth from the city walls.  To look at Exeter from the river was to see a river of colour all round the city.

The cloth was produced in Exeter though it was not always Devon wool but brought in from Somerset, Dorset, Cornwall - even Wales, Spain and Ireland (because labour was cheaper in Ireland it was cheaper to import their yarn than buy it locally!).   The finished cloth was exported to Germany, the Low Countries, France, Italy, Spain and Portugal.  Millions of lengths were sold, some as long as 80 yards!  Woollen cloth-making was Exeter’s most important export from 1300 to the 1830s and its success was in large part due to the entrepreneurial attitude of the merchants who were quick to change cloth designs to meet changes in fashion.  Many sent their teenage sons to Europe to promote their fabrics and report back on market changes.  The market was very volatile and colour fashions changed rapidly.

Surprisingly little is written about the wool trade.  There are really only four books and the best of these is by Hoskings produced in 1935.  One Peter Maunder wrote a very well researched book on the trade in Tiverton.

Todd explained that three years ago when researching another subject (the Clarence Hotel) in the Metropolitan Archive Buildings and, finding he had some time to spare, he asked about a pattern book by a wool merchant called Claude Passavant.

This amazing book’s one hundred pages contained 2,500 examples of woollen cloth with details including the maker, the date and the type of cloth (see sample above). Todd says that he was overwhelmed.  Here were page after page showing wonderfully bright and fresh colours.  The samples were 280 years old but the book had been little used so its preservation was unbelievably excellent.  The book itself had not been opened since 1950! It showed the many different types of colours and weaves – Sandfords, seconds, duroys, druggets, slitts, shalloons, all somewhat unfamiliar terms today.

The discovery of this book of samples has been hailed by Associate Professor in Medieval History, Prof. Catherine Rider, as `the discovery of a generation’.

Todd told us that this discovery set him off on a whole new area of research. He found that one Anders Berch in 1700 in Sweden had collected cloth samples – including lots of Devon cloth - and Todd also found beautifully coloured samples in local museums.  He found a blue and a black sample from 1711, and fabric from Tiverton in 1715.   Another sample came from Tavistock in 1750 and he located Cornish scarlet from 1798.

An exquisite example of our local cloth was a beautifully embroidered court gown measuring 6ft across from side to side made for Isabella Courtenay. One hopes she had no need to sit down in such a garment!

In 1758 Claude Passavant was also producing tapestries and wool carpets, many of which are in National Trust homes today.  He had started in 1720 with the purchase of some cheap looms and he brought in weavers who had the different skills that were needed for carpet and cloth dying. He was incredibly successful until about 1850 when the trade collapsed.  This was mainly due to the East India Company who bought wool in Devon and finished it in London.  The trade in Exeter struggled on until the 1900s but it was insignificant.

Todd told us how eager he was to bring to the general public a greater knowledge of the trade in Exeter and had been delighted to find twelve specialists to write about various aspects of woollen cloth making in Exeter.   These are now published in the Exeter Cloth Dispatch Book 1763-5 which is currently available at a launch price of £25 through stevensbooks.co.uk.