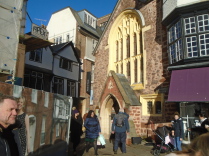 On Monday, 5 March 2018, Dr Stuart Blaylock took through the history of the Guildhall from medieval times to the present, covering a time span of 600 years.  Dr Blaylock is a noted archaeologist and architectural historian whose researches cover domestic architecture from the medieval period to the 17th century. 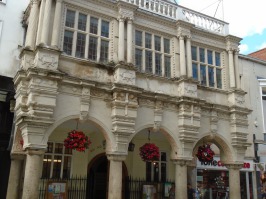 thought to date back to the 16th Century.  It has been described by W. G. Hoskins as

merchant". Having survived the slum clearances of the 1920s and 1930s, the Second

World War and the post-war reconstruction, the house was demolished in the 1970s.

John Thorp’s skills in providing a high standard of buildings analysis, research and

assessment and producing reports that are reliable, well-illustrated, and free from

Owing to bad weather (snow) this event  was been postponed to 9 April.

On Monday, 26 March, Dr Todd Gray, a well known and popular speaker, will be showing us ancient maps as he takes us through the history of many of Exeter's ancient buildings. 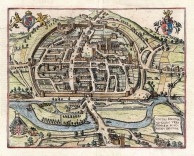 Dr Gray, FRHistS, MBE, is a historian long based at Exeter University.  As of 2007 he

was Honorary Research Fellow of Exeter University, Chairman of the Devonshire Association and of Friends of Devon's Archives (retired 2014) and President of the Family History Society.

On Monday, 9 April 2018,  John Allan took us through the history of St Martin's Church and other churches of late Saxon and Norman Exeter.

John, Exeter Cathedral’s own archaeologist, is a  fellow of the Society of Antiquaries and is also the Archaeological Adviser for Glastonbury    Abbey.  Formerly he was Curator of Antiquities at Exeter Museum 1984-2004). He has published a book and numerous papers on the  archaeology and architecture of South-West England.

NOTE:  This talk was originally scheduled for Monday, 19 March, but was postponed, on the advice of the police, because of high snowfall.

On Monday, 16 April 2018, Dr Jo Cox, a well known and popular speaker, told us about St Thomas' Church which was burnt down during the Civil War and rebuilt in 1657.  It has Victorian Gothic additions.

Jo is a partner in Keystone Historic Buildings Consultants.  She has a special interest in Victorian Gothic churches and is keeper of the archive of the Devon 19th Century Churches Project.

On Monday, 23 April 2018, Clare Maudling will be giving us a talk about Exeter's Post War Development.  She will explain how the gracious buildings along the High Street replaced the bombed city and gave Exeter back its life. 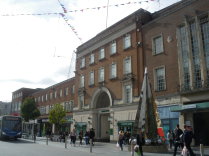 Clare is the library assistant to the Devon and Exeter Institution's current Heritage Lottery Funded project and also works on the former Westcountry Studies Library collections.

On Monday, 30 April 2018, Dr Diane Walker explained the meaning of the term "Moving Monuments".  She explorde a variety of monuments in Exeter Cathedral, looking at the reasons for the location of some monuments, how the collection of monuments in the cathedral has altered over the centuries, the language of mourning and some fascinating stories associated with those commemorated.

Diane has a long interest in church history  and architecture and has been particularly interested in tracing the post-Reformation changes to the interior of the Cathedral.  This, of course, includes consideration of the monuments.  She also organises the training of cathedral guides and is a member of the team working on the cathedral inventory.

This event was originally scheduled for 9 April but Diane has most graciously agreed to a postponement to 30 April to make way for John Allan's talk to be re-scheduled on that day.