IMPRISONMENT IN EXETER THROUGH THE AGES 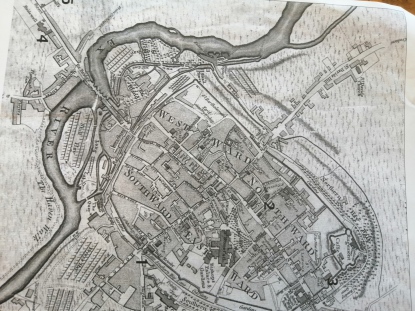 Charles provided us with a copy of Donne’s 1765 map (above) showing five areas of Exeter with penal establishments.  This showed:

1. City Gaol and Debtors’ Prison at South Gate (demolished and replaced by building which eventually became the site of the Rougemont Hotel in Queen Street)

2. House of Correction behind the Guildhall in Goldsmith Street (basically just a cottage and eventually moved to the new prison)

3. Rougemont Castle (cells in basement and also see High Gaol on map with cells in what became the Timepiece Bar in Little Castle Street )

The talk began with a history of prisons from the time of William the Conqueror, including the Tower of London, and the law surrounding criminality.  Charles then described the various establishments in Exeter and  in particular the prison we have today located in New North Road where he had spent many years as a member of the Board of Governors.

The  Devon County Prison (now Grade 1 listed)  in New North Road was originally built in 1792 and then rebuilt between 1809-28. An “Outline plan of County Prison in existing buildings in 1848” (see below) shows areas hashed Green as 1792 buildings to be demolished, hashed Blue as buildings retained, hashed mauve as 180 9-28 buildings to be demolished and hashed Red as 1828 buildings retained. Devon County Police Headquarters was added at one end of the building (nearest to Blackall Road).

nurseryman. The prison is of a cruciform design enabling the Governor to view all parts of the building. Conditions in the early years were grim and gaol fever was rife and one John Hayward campaigned for improvement.

In the Debtors’ Prison prisoners were obliged to pay for their stay until such times as they could settle their debt to their creditors, but creditors were also obliged to contribute to their upkeep, which didn’t always happen.

Punishment was extreme with the use of the treadmill which had no useful purpose. Other prisoners operated the crank pump for the supply of water, and others were employed breaking up stones for use as road or rail ballast. Oakum picking from old ropes was used as caulking for ship repairs or to stuff prison mattresses. There were other menial tasks for the women.

Prisoners were kept silent by the use of uniforms and special masks but were allowed to attend chapel. Men were admitted first, then women, and debtors sat on the floor at the front so they could not be seen.

Food consisted of gruel and bread for breakfast and supper, with meat provided for the main meal.

Sanitation was primitive with use of a bucket and slopping-out. Today, the food is excellent with some cells – usually every third cell - converted to provide toilets and showers for those in cells on either side.

Executions were in early times conducted in full view of those watching from Northernhay Gardens, but later in an execution shed away from public view.  One famous execution was that of John ‘Babbacombe’ Lee became famous when the hanging machinery, though in perfect condition, failed to hang him three times. His sentence was commuted to life and he died in 1922 at the age of 68.

Exeter Prison is a remand institution and men and women are moved on to long-stay prisons once their cases have been heard by the courts and sentences decreed. Opportunities for rehabilitation are therefore not possible for what are usually short-term incarcerations. But visits are allowed in the afternoons for an hour’s duration and prisoners have access to the Governor, the Chaplain and for medical reasons. Conditions are no longer primitive.   There is a compulsory hour for recreation and exercise, meal choices are eaten in their cells and there are employment opportunities within the prison workshops and cleaning duties.