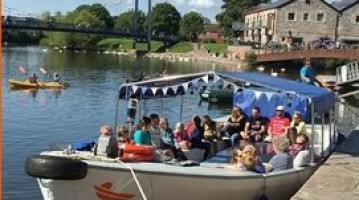 On a fine sunny day many of us met up at the Coffee Cellar for a  quick chinwag before, at 11am, stepping onto the boat which was to transport us to the Double Locks for lunch.   We numbered twenty two in all and were accompanied by three dogs whose behaviour was impeccable!  At the Double Locks we had a splendid lunch (food pre-ordered so no delays there!) which was served to us in their marquee.   It also provided us with a great opportunity to make contact with so many who we hadn't seen since lockdown had so limited our social lives.  We wandered around the river's edge (where it was almost too hot for comfort) and admired the river locks before boarding our craft for our return journey.

On our trip up Exeter Canal, we learnt how, in the 13th century, Isabella, Countess of Devon, built a weir across the river to power her mills and then her cousin expanded the weir thereby closing the river for shipping.  With a new quay at Topsham for boats to unload, the Courtenay family were able to exact very large tolls to the detriment of Exeter's economy.

it was not until Henry Courtenay was executed for conspiracy in 1538 that permission was granted to re-open Countess Wear for navigation.   John Trew was the engineer employed to build a 1¾ miles (5.2 km) long canal to bypass the weirs. This was completed in1567 and is one of the oldest artificial waterways in the UK.  A weir to maintain the water level in the quay is still named "Trew's Weir" after the canal's builder.

In 1676 the canal was extended to Topsham allowing 16-ton barges access to the city centre and in 1701 the canal was deepened and widened to allow the passage of ocean-going ships.  This meant great success for the canal and Exeter became one of the richest cities in the country.  But early in the nineteenth century demand declined with the end of the wool trade. Sadly that new fangled invention - the railway - was dismissed and little effort was  made to accommodate them.   The subsequent rise of the railways caused the canal business to decline further.

The Countess Weir swing bridge that we have today was built in1936 and in May 1944 it was used to rehearse D-Day attacks on bridges in Normandy.  A plaque acknowledging this is sited on the east bank

But canal usage continued to decline and the largest ship ever to use the canal delivered its final load of 244 tons of petrol in July 1971.  All commercial traffic ceased in December 1973 although the MV “Countess Weir” continued until December 1998 to transport sewage sludge out to sea to be dumped.

In the 1970s, the canal basin was used for filming quayside activity in the historical TV drama “The Onedin Line” - set in Liverpool! The quay area still has the beautiful custom house dating from 1681 and a mix of Georgian and Victorian buildings, redesigned for modern use.  The basin itself is popular today for a range of water sports such as canoeing, rowing and kayaking.

A ferry has been operating across the river at Exeter Quay since at least 1641.  Today the Butts Ferry is a person-powered small passenger boat which operates during daylight hours (many small boys have begged to be allowed to operate it - sometimes successfully!).