Exeter's leats were built in the 10th century, not to supply mills with power, but to drain and reclaim land between the city wall and the river.  This reclaimed land, intersected by several cuts and branches of river water was noted by Jenkins as “very convenient for mills, dye houses etc, which once occupied a great part of it”.

These artificial water courses include the Higher Leat which started from Head Weir below the Bonhay cliffs and next to the Mill on the Exe and flowed to the Quay to form Exe Island. 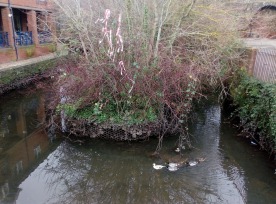 By the 12th century there were two main leats.  The Lower Leat split from the Higher Leat and flowed parallel with Bonhay Road, re-joining the Higher Leat just to the rear of the Custom House on the Quay. Both then rejoined the river. (This photo shows the point where the two leats join.  Behind the photographer is the pedestrian bridge by the Riverside Cafe.  The ducks enjoy the still waters!)

A third waterway, Coney Lake formed the island of Shilhay and was cut about 1820 to form a sort of canal wide enough for small boats to transport goods to ships waiting in the river port by the Custom House.

Mill owners managed the leats and were elected annually. Minutes of their meetings show that they met in various pubs, including the Cattle Market Inn, the Valiant Soldier and the Kings Arms.  The beds of the leats belonged to the City Council which was consulted about their maintenance.  The costs were shared by the mill owners, based on the number of mills each ran and the length of the leat needed to serve them.

In 1874 the City Council requested that water be allowed to flow over Head Weir every Sunday to oxygenate the river water during a drought.   So for 7 weeks, between 8am and 8pm, the fenders were lowered to divert the river water out of the Head Weir.  Then in 1923 an Act of Parliament required the mill owners to lower the fenders every Sunday, and on those days on which the mills were not working, to safeguard the salmon and trout fisheries

In the 20th century two Captain of the Leats were William French and George Shears.  The latter still held the post after the Head Wear Paper Mill closed and it became the public house now known as the Mill on the Exe!

During the 1930s and 40s the leat gates were lowered once a year, for a week, for maintenance work and for the beds to be cleaned and rubbish removed by prisoners from Exeter prison.

Today, Cricklepit Mill is the only remaining mill on the island.  We visited it after a short walk noting something of the history of the city walls and the remains of Exeter’s gateway to the west.