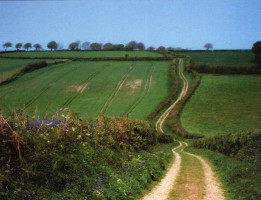 On Wednesday, 12 June, we learnt from Valerie Besley about the Green Lanes of Devon.  These are the centuries-old trails used by locals to go about their daily business.  They are irritatingly unstraight because they go round the strip system of farming.  Pre Anglo-Saxon lanes are usually (but not always) sunken and oak trees were planted as marker points to head for.  They often had drainage ditches alongside and all were cobbled – though this has become covered in earth over the centuries.

There is no official designation for green lanes – the road signs simply state “unmetalled roads”.  They are not therefore protected in law in any way.   There are moves to change this by re-designating them as  footpaths and bridleways.   The well-used ones have some council maintenance but many only have their integrity maintained by walkers and even bikers (both bicycle and motor bike users).  Some green lanes are marked by hedgerows or with walls. In East Devon these walls are constructed of horizontal sandstone slabs.

We saw a map of Devon showing both the lanes and water courses.  A nearby water source was of enormous importance in those early days when containers to carry it were not too efficient.  Bridges needed to be constructed and interestingly, those who worked on the bridges gained an indulgence from the pope (which would let them off punishment for earlier sins). We saw pictures of many interesting plaques on these bridges but in fact they are all fakes.  So many were stolen that the authorities removed the lot for safe keeping and replaced them with copies.  These still get stolen.

The lanes had many purposes: they led to churches, chapels and workplaces (mills, slate quarries, lime kilns).  Paths on the top of hills, called trustways, were where harvested corn was stacked before being taken to market.  There are not many green lanes on Dartmoor.  Maps show a multitude of lanes leading to grazing grounds on the moor, and then petering out.

Sleds (called trucker muckers) were dragged along these lanes by a person rather than a horse and were used right up to the 1900s.  Horse-drawn wagons were also used and, because of the narrowness of Devon’s lanes compared with, say, Yorkshire, a crook was devised to keep goods safe on top of a horse rather than hanging more easily on the sides of the animal.

The coming of toll pikes meant the introduction of new surfaced roads but many preferred to use the old roads thereby avoiding having to pay tolls!

There is an enormous variety of plants growing in the hedgerows, walls and lanes and often the age of the lane can be calculated by the number and variety of plants and grasses occurring.  Similarly the lanes provide homes for many small animals.  There are bird nests and moles, shrews and mice in abundance.

The whole presentation was punctuated by beautiful Devonian songs from Ben Causley who is an English folk singer, songwriter and musician from Devon.  He specializes in the traditional songs and music of the West Country.  Born in Exeter he hails from the village of Whimple in East Devon.  He is a relative of the Cornish poet Charles Causley.

Described by Mojo Magazine as "the finest singer of his generation", Causley grew up in an area rich in traditional music; his home village in the heart of CiderCountry with its thriving wassailing tradition and its close proximity to Sidmouth and Dartmoor folk festivals.