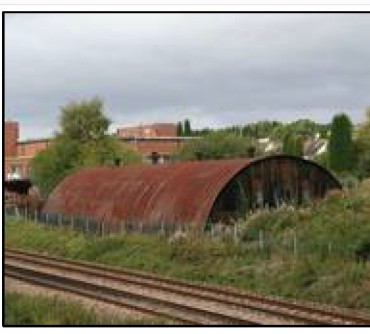 adjacent to the main railway line

During the  Second World War  the  government  of the day  organised depots for the strategic stockpiling  of  foods  – cold  stores,  grain stores,  fuels  stores  and  general  warehouses  – and  most  structures were adjacent to a main road and/or a railway siding. Purpose-built stores were constructed to a standard design, examples of which have been noted at:  a cold  store at Goldsborough in North Yorkshire, which is reported to be of Second World War origin; a cold store  at  Farncombe  in  Surrey;  and  a  wartime  store  at Sutton-in-Ashfield in Nottinghamshire.

Emergency  measures  for  food  distribution  and  control  were  put  in place  during  hostilities  and  these  included a zonal  stock  distribution scheme that,  in  the event of an area being cut off from  the  supply network  or  when  communications  were  too  difficult  to  maintain stocks, allowed wholesalers and retailers to be replenished by drawing on Ministry stocks stored in the zone.

The  country  was  divided  into  104  zones  (nine  in  the  southwest)  in which the Ministry of Food kept essential foods.  In 2007 a commercial cold store in Chancel Lane, Pinhoe – a suburb of  Exeter  – was  earmarked  for  demolition.

housing and demolition took place in early 2009.  The  store  was  identical  in  design  to  those  mentioned  above,  was adjacent  to  a  main  road  and  to  a  main  railway  line,  from  which  a siding  once  looped  to  the  facility.  From  this  evidence  it  could  be concluded that the building had a wartime connection, although firm information from local sources has proved to be elusive. 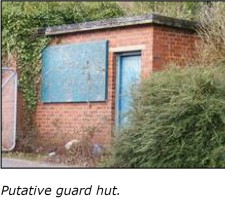 The date of 1942 and mention of the involvement of a government body tends to confirm the speculation about the store’s origins. The presence of what was possibly a guard hut at the site entrance(seen also at Sutton-in-Ashfield), illustrated above, and a Nissen/Romney-type hut adjacent to the main building, similar to those used by the military and government departments, supports the theory.

This leaflet (no. 10) is one of a series offering a brief introduction to twentieth century

military and civil defence archaeological features and structures in Devon.

While most can still be seen, some were being removed as this research was

undertaken in 2009/10, and some are earmarked for future demolition.

The source list on page four provides a guide to further study. 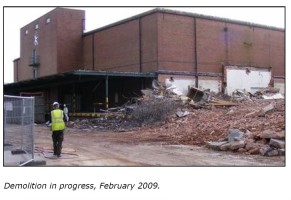