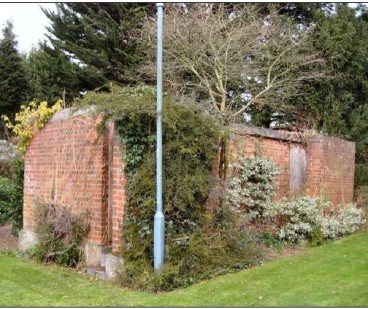 The shelter’s east elevation viewed from the south-east. Two blast walls, protecting the structure’s entrances can be seen. A third blast wall and entrance are concealed by the greenery on the far right.

During the Second World War many types of shelter were used to afford protection to the
civilian population against an air raid. These ranged from natural caves in some areas of the
country, and the underground railway in London, to purpose-built structures for use at home
or  in public  places,  the  latter  provided  as  a  result  of  legislation. The  most  familiar  were
probably the Anderson and Morrison shelters, as well as street and basement shelters.

Named  after  Sir  John  Anderson,  the  Home Secretary  at  the  outbreak  of  war,  Anderson
shelters were erected in the gardens of private houses. Partially buried and earth protected,
they were constructed of curved, corrugated iron and could accommodate six people.
The Morrison shelter took its name from Herbert Morrison, Minister  of Supply in  the  early
days of the war. This shelter was for home, indoor use and comprised a steel-topped frame
with wire-mesh grilles on all sides. The shelter could be used not only as a sleeping facility
but also as a domestic table.

Both Anderson and Morrison shelters were supplied free to those on low incomes. A report in
the Exeter City Archives, held at the Devon Record Office, mentions free provision to those
whose income did not exceed €250 per annum.

Air-raid  shelters  were  also  made  available  to the  general  public  and  took  the  form  of
basement  shelters,  underground  facilities, or  surface  brick  structures  with  reinforced
concrete roofs. Entrances/exits to the latter were usually protected by a blast wall, or were
traversed to safeguard against blast damage.

Within the Exeter City Archives are papers originated by the City Engineer and Surveyor and
these  record  over  180 above-ground  shelters  in  the  city’s  public  parks  and  streets, and
basements adapted or earmarked for air-raid protection in public buildings such as the Royal
Albert Memorial Museum and in a number of business premises.

Most shelters were demolished at the end of the Second World War, some were let to local
traders for use as storage or workshop facilities, while some simply stood abandoned.

It should be noted that there is no public access to the site of this structure. 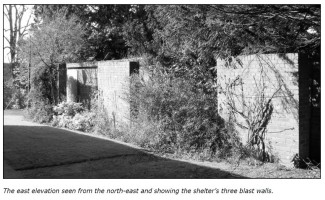 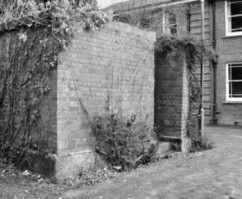 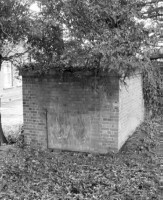 The photograph illustrates the position of blast walls in relation to the shelter. 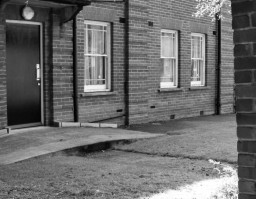 A path, now partially obliterated by a later access ramp, led from student accommodation to the shelter

The shelter  is  a rectangular  single-storey  building measuring externally  15.97m in  length, 2.75m in width and 2.17m high. It is constructed of brick laid in English bond, with a 0.17-0.25m thick (probably reinforced) concrete roof; the roof slopes to the west dispelling water away from the entrances. The walls were built on a concrete foundation slab measuring at least 0.45m deep.

The building is terraced into the hillside and this slab is only visible at the south end. Unusually no air vents are present.  There  are  three  entrances  to  the  shelter – on  the  east  elevation – all now blocked.  Each door is protected by a tall blast wall 0.35m (1. bricks) thick. A concrete path survives along most of the length of the shelter, and could be accessed via two steps at its south end. A path, now partially obliterated by a later access ramp, led from a door in the west elevation of the adjacent student accommodation to the shelter.

In the north elevation boarding obscures an opening of the type seen in other shelters. This opening served as an emergency exit, and measures approximately 1.2m wide by 1m high.Whilst lower than a standard door, this size of opening is comparable with emergency exits in other air raid shelters (e.g. at the Imperial, Exeter5).

As  mentioned  above the  structure’s  doors  have  been  blocked  and  thus  there  was  no opportunity to record or comment on the interior of the shelter. It was possibly constructed for at least fifty occupants who would have sat on benches attached to the walls. The shelter would probably have also had some sanitary provision, almost certainly one or two chemical toilets. Some shelters with multiple entrances had internal traverses to deflect the effect of a bomb blast6, but this seems unlikely in this structure due to the building’s narrow width.

For its age the building is generally in good condition.