From Museum to University College: A Guided Walk

This walk was designed to celebrate two of the original founders celebrated by Exeter University – Sir Stafford Northcote and Miss Jessie Montgomery.

Sir Stafford Northcote (of Pynes at Upton Pyne) as a young man was appointed as one of the secretaries to the Royal Commission (headed by Prince Albert) which in 1851 set up the Great Exhibition, Britain’s showcase for arts and manufacturing.

Inspired by his experience Northcote (whose statue is in Northernhay Gardens  - see left) suggested that Exeter should set up its own museum, art gallery, school of art and public library. His idea initially fell on deaf ears, although a School of Art was established in 1855. When Prince Albert died in 1861 he put it forward again. This time the idea received wide support, funds were raised and the foundation stone for the Albert Memorial Institution was laid on 30 Oct 1865.

It is unusual for a woman to be celebrated as one of the founders of a University, except as a wealthy patron, and Jessie Montgomery, niece of a cathedral canon, was not wealthy.  She simply had energy and a passion for extending educational opportunities to as many people as possible.

Her own formal education was limited, but in the 1870s she was an early student on the University Extension Scheme in 1875.  Under this scheme lecturers from Oxford and Cambridge visited provincial towns to give lectures for a term. Local people could attend courses at the Museum run by the distinguished academics.  The scheme flourished and in 1885 Exeter became a recognised university extension centre.  Jessie was one of the centre’s joint secretaries and a keen promoter of the scheme.

In 1891 new government funding for technical education became available. Jessie doggedly argued that the money should be spent on creating a single educational establishment, the University Extension and Technical College, which would unite the schools of art and science with the new technical education courses and the university extension centre. She was successful in her campaign and over the next twenty years she nursed the new organisation until it finally became the Royal Albert Memorial College.

Using the Museum’s Garden Entrance we stopped briefly at Gallery 10 where the Museum displays cases of items about its own history.  We then walked over the bridge between the new and the old and turned into Gallery 22. Originally this was a classroom for the School of Art with further technical rooms and the School of Science behind.  Below (now the shop) was the free public library and reading room.

On the other side of the staircase were the rooms for the museum’s collections. We admired what had been the Art Gallery (right)  and looked down on what had been the ethnological museum below, now part of the cafe. Beyond that had been the natural history and antiquities museums. These two large rooms were not built when the museum first opened. Thinking it would be easier to raise more money if people could see what the museum would be like, the trustees embarked on the building before they had the money to fund the whole project. The official opening in April 1868 was therefore accompanied by a bazaar where visitors’ purchases helped raise funds for completing the South Wing. It must have been successful, for the whole building was completed only a year later. 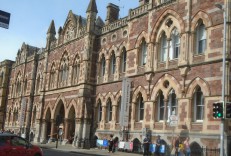 After admiring the imperial staircase and learning about the details of its construction we went downstairs and outside to admire the exterior.  The architect, John Hayward, had designed St Luke’s College and Exeter Prison. He worked in a Gothic Revivalist style, deriving ideas from twelfth-century century French Gothic architecture, and using contrasting coloured stones from all over the West Country. 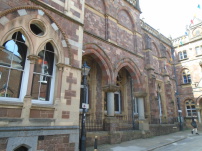 Turning left round the outside corner of the museum, we saw how the line of the building and the archi-tectural style changed to a more florid Italian Gothic. This is the Kent Kingdon extension. Kingdon, who  died in 1889, had been a firm supporter of the museum.  He directed that when his sister died (which she did three years later), the family money should be used to finance additional rooms for all the functions the institute was now fulfilling.

His very precise instructions about the extension proved too extensive for his architect, the Rev. Medley Fulford, to fit on the site. Rather than face a court case the Museum Governors decided to buy and demolish an adjacent house on Paul Street so that the extension could be built as planned. 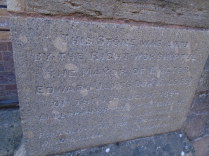 Building commenced in 1894 but it was not officially opened by the Duke of Devonshire until 1898 (see plaque). Soon though the space problem recurred as museum collections grew, student numbers increased and courses developed.

The only solution was another new wing.  Many locals had subscribed to the Diamond Jubilee Memorial Fund in 1897 and it seemed fitting to commemorate the Queen’s Jubilee by extending the building named after her husband.

Although the new extension looks just like a town house, it is a great deal bigger than it appears as it extends backwards to wrap around behind the existing buildings.  The foundation stone was laid in September 1898 and this new wing contained five large classrooms, a laboratory, apparatus rooms, a students’ reading room, a cast room, lavatories and offices.   Innovatively, they were all to be fitted with electric lights!!

Who should be asked to open the extension? The Queen was 80 - far too old. The Prince of Wales could come but not soon enough.  Fortunately his eldest son, the Duke of York with his wife (later King George V and Queen Mary) agreed to open the new wing on 4 July 1899. In their honour the new building was named the York Wing. At the same time it was announced that Her Majesty had graciously consented to the prefix ‘Royal’ being added to the titles of the institution.  So in 1899 the Albert Memorial Museum was renamed the Royal Albert Memorial Museum, and the college became the Royal Albert Memorial College.

By 1900 the Museum had expanded to fill the whole of the original site and all of Upper Paul Street.  But then Henry Willey of Willey’s Foundry made the case for a new Engineering and Manual School. The Council agreed and planned an extension to the rear of the existing building, connected by a covered corridor. The Lord Mayor of London – who ran an engineering firm himself – came down and laid the foundation stone in 1902.  But it was never built, because a new idea emerged. 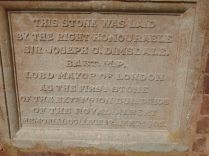 As education expanded there was a need for more teachers to be trained. The only teacher training college in Exeter was St Luke’s, exclusively for men.  Jessie Montgomery and Principal Clayden planned to set up teacher training for 40 women and 20 men but the Board of Education refused a grant unless the college was housed in a dedicated building, not scattered here and there in classrooms in the Museum. A halt to current plans was called, and the city agreed to purchase and clear premises at Bradninch Place off Gandy Street for a new free-standing building housing both teacher training and engineering.   (We subsequently found, stuck in a nearby wall, the memorial stone marking the commencement of building work in 1902 - see left). 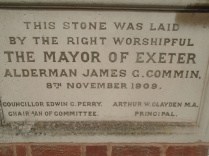 But though plans were passed for an entirely new building, the Board of Education then came up with another objection – that secondary education in the city needed to be re-organised so that teaching practice could be undertaken to a satisfactory standard. It was not until 1909 that Exeter’s mayor laid the foundation stone (which can be seen on the right on the front wall) and building work began.  The building was divided between a teacher training college and the Engineering and Manual School. Each had lecture rooms, classrooms and student and staff rooms.  The trainee teachers also had a library and the engineering students laboratories. 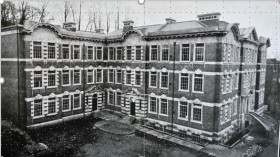 The exuberant fantasies of the museum architecture gave way to a more sober building faced in Portland stone, signalling the earnestness of the endeavour.

On 20 October 1911 the Lord Lieutenant, Earl Fortescue, formally opened the building which remained in use until the late 1960s - even after the university was set up on the Streatham Campus.

We then strolled up towards Northernhay Gardens and were delighted to locate, set in a newish bit of wall, the 1902 memorial mentioned earlier.   Leaving the Gardens we crossed Castle Street to Bradninch House, formerly called The Vineyard. 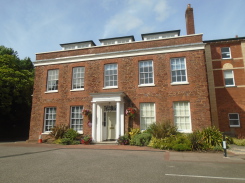 Students from other parts of the county needed somewhere to live. A number of houses to be used as women’s hostels were purchased and this lovely eighteenth century house (right) was the largest.  Jessie Montgomery became temporarily its first warden.  Sadly, she died in the autumn of 1918, just before the end of the war.  She therefore never learned the outcome of her labours for a university for Exeter. 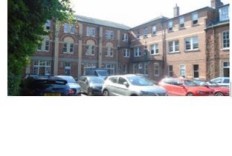 We walked round to the back of this building to see how very large the Edwardian extension is. (Brandnich Hall can just be seen on the extreme right of the above picture)

We then headed up the hill to the Castle where we learnt that the College Governors had been applying for a number of years for university status for Exeter. Universities were becoming established elsewhere, even in Bristol.  But Exeter had been turned down. Initially this was because of lack of accommodation. Once the new college buildings opened it was hoped approval would follow.

Next, however, came a more difficult problem. The Board of Education decided that any new university must have an endowment fund. The Governors agreed in 1911 to raise one, of at least £30,000. Unlike other cities, Exeter had no wealthy manufacturer on hand to provide such an endowment single-handedly. It was going to have to be scraped together.

The war, of course, interrupted this, and then, when the war was over, national arrangements changed. The Board were no longer willing to create new universities, but they were willing to grant a charter to a “University College” serving the whole of the south west beyond Bristol, so long as it was affiliated to London University rather than independent.

The endowment fund was still required. Supporters lobbied all Devon and Cornwall’s local government education agencies to contribute to the fund. One by one they agreed, but the largest, Devon County Council, sited at the Castle in those days, had doubts.  Fortunately, Sir Henry Lopes, the Council Chairman, was a great supporter. He persuaded his fellow councillors to make a major financial contribution to what was to become the University College, no longer just of Exeter, but of the South West.

So, on 1st August 1922, a charter was issued for the incorporation of Exeter University College as the “University College of the South West”. The new body had an independent but representative Court of Governors, a Council, and a Senate. From then on students would be prepared for university degrees here in Exeter, although it would take a further 33 years for those degrees to be issued by Exeter University itself.