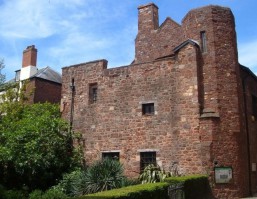 We met for a quick cuppa in an extraordinary room with the most fantastic roof structure. This was on the top floor of the West Wing which is only open to the public by special request. Our guide then took us downstairs explaining that the Priory had originally been a four sided building with a central garden but huge changes had been made over the centuries and two sides (the north and east) of the priory had gone so only an L-shaped building was left.   Then a passageway was made beside the centre of the L and Mint Lane was created.  In due course the building over that passageway was removed but it is hoped that one day it will be put back.

The Priory is one of the oldest building in Exeter, dating from about 1087.  After the Reformation it had many uses, at first as an elegant private home but over the centuries it deteriorated and around 1900 the remaining tower and the whole building were in a terrible state.  Improvements were made between 1914 and 1916 prior to its being converted into a museum.  Mrs Tothill was the first curator (from 1916 until 1938) and she kept ravens – one, Martha, was stuffed and is still to be seen in the building.  The bird’s obituary was published in the Express & Echo on 23 March, 1928 ! 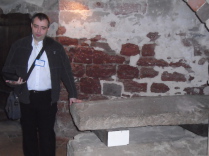 There was also a very large coffin thought to date from around 1250.  It was found in 1899 at the Cowick Barton pub – originally a farmhouse belonging to Cowick Priory.   Its original occupant was probably middle gentry for a high nobility person wouldn’t have been buried at the farmhouse church.

After the Reformation the next room became a Tudor parlour where the family would eat their meals.  The original paneling was sold in 1869 to Monkerton Manor in Pinhoe and subsequently disappeared in the 1950s - it might still exist somewhere.  The paneling now in the parlour came from 229 High Street.  In 1933, when it was the fashion to have period rooms, it was sold to America but subsequently it was purchased and brought back and installed here. The colours are based on the design from a building in North Street.   The Tudors loved bright colours but the Georgians did not so they stripped everything or painted over it.

The paneling is primarily 1600 though bits are probably 1800.  In those days people took their paneling with them if they moved and then commissioned replacememnts for gaps when reinstalled in their new home. The design for the frieze above the paneling is based on remnants of one in the great hall upstairs. The fireplace has about 20 layers of white paint but would originally have had ostentatious colours. Hopefully one day the colours can be restored but scraping off all the white paint would take over six months to remove each layer at a time and cost @ £20,000.  Ceilings were always white as they reflected light well and this one has never been restored.

All the furniture is reproduction but of Tudor design. The table was designed to facilitate illegal gambling (shovel board) but the evidence can easily be removed and hidden.

It is difficult to know who lived in this building because records do not note rentals only owners. We assume the Hurst family lived here as they are recorded as living in this parish and this was the only good sized house.  Also, the ceiling design contains the initials WH and MH (their names were William and Mary Hurst).

The building had many uses throughout the centuries.  We saw where coins might have been made during the Civil War – hence the name Mint Lane.

But by 1900 it was a block of slum flats.  A Miss Tatchcock lived with her family in a room upstairs until they were rehoused by the Council in 1913.  She has recalled that this parlour was a public space for all the families living there.  She learnt to skate in this room and her brother’s 21st birthday was celebrated here.

We headed to the kitchen which, because of the fire risk, is on the edge of the building with its chimeys facing outwards. The room is set out as a late medieval Tudor kitchen with the two original fireplaces one a wet fireplace and the other a dry one for roasting. The equipment in the kitchen is all replica Tudor copied from the originals on display in the museum.  These can all be used; we admired the authentic replica feather duster with swan feather.   Children are encouraged to make butter and potage (awful taste) using Tudor equipment.

There was originally a room above but the floor (probably rotten and unsafe) was removed in the 1930s.  It was probably a servant’s room approached by a still existing narrow staircase which also leads to the guest bedroom.  Around 1911 this kitchen was converted into a separate 3-storey house lived in by a Mrs Scott with husband, 4 children and her father-in-law.

Sadly many medieval windows were blocked up and new ones installed back in Victorian and Edwardian times.

We climbed a circular staircase to the next floor and admired a statue of St Nicholas (right).  This had been purchased by Mrs Tothill after saving up three years of donations for it. 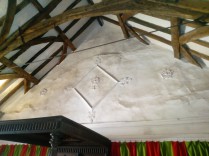 At the top of the stairs was the guest bedroom. Food could be delivered to this room direct from the kitchen using the narrow staircase.  Originally this room had curtains all round the walls perhaps green and red alternately (just showing at the bottom of pic, right).  We can still see the nails on which the original curtains hung. There are Tudor roses on the upper wall, a beautiful plaster ceiling and it had its own garderobe - the name originating because clothes were stored there so that the ammonia smell would kill the bugs!

It is conjectured that King John may have stayed here.  He visited Exeter three times and did give money to this building so perhaps he stayed over ! The oak bed is Tudor from Countess Wear.  It is a simple wooden bed with an added canopy so it is not as grand as it looks - a bit nouveau riche.  The canopy is quite ornate so is probably early (pre-Reformation) Tudor (it is just visible at the bottom left of the photograph above).  The bed has pegs to hold the mattress in place.    Posh beds had the mattress recessed into the frame. The expression “sleep tight” comes from the ropessupporting the mattress and which could be tightened when they slackened. Pillows and mattresses usually contained wool. Top people had feathers and the poor had hay/straw.

Next door was the hall, a really big room, dated as 1450 with later Tudor additions.  The middle floor boards are replica but those at edge are probably original. Any windows facing inwards are Tudor or later because monasteries would never have windows overlooking the cloister.  The glass has been replaced but windows are medieval.  The remains of the frieze in this room inspired the parlour frieze design.  The plasterwork designs in the windows are very rare in the south west.  Probably they were protected by shutters.  Only discovered in 1914 is a coat of arms for Sir John Greville from the 1550s.  He probably lived here before the Hursts.

The 1914 architect had produced a drawing 20 years earlier.   We saw a copy.  He wanted to reconnect the two buildings.  It never happened due to money shortages caused by the war.

The Priory is on the Hoghenbegh 1618 map shown asa big estate occupying 2½ acres of land - the second biggest house in Exeter. What is now the graveyard was at some time probably added to monastery.

We returned to the West Wing to see some of the ancient rooms there and to have a reviving coffee before heading off to our various homes.