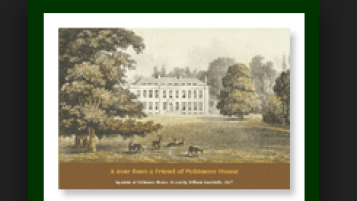 On Thursday, 9 November, twenty two of us assembled at Poltimore House for our tour.  It started, delightfully, with a delicious slice of home-made cake and a cuppa and then our excellent guide, Rikki, gave us a run down on the Bampfylde family which had occupied the land since the 1300s..

In Tudor times they built Poltimore House but there have been many changes and additions since those days.  The frontage is typical of a Georgian country house but inside are many Tudor remnants.  Originally, Rikki explained, the house was L-shaped but in due course it became a square with a courtyard inside.  Latterly, that courtyard has been turned into rooms but now most of it is open again.

We entered through the portico into a very grand square room with a delightful staircase ahead of us (sadly closed to the public for safety reasons – dry rot?).  We turned right into a once-elegant drawing room which in Tudor times was two rooms but back in the 1830s they were joined and decorated.

Next was the ballroom which had been the Great Hall in the Tudor house, originally 40’ long, now shortened to 30’.  The Treaty of Exeter, which marked the end of the Civil War, was negotiated here.

It had been rebuilt around 1730 with wonderful rococo plasterwork painted gold against a pale blue background.  Someone some time decided to overpaint the lot in magnolia!    So much was stolen from this and other rooms when the building was untended in the 1960s.

Rikki explained that the worst spell of the building’s history was when, in the 1960s, it belonged to  no one !  Unowned buildings revert to the Crown but the Crown was not prepared to take responsibility for the building’s large mortgage. After about five years the mortgage company and the Crown came to an agreement that the building should become the property of a charity but in the meantime thieves and vandalists helped themselves to so much.

Two plaster heads, part of this room’s wall decoration were missing but not lost because an observant policeman saw a car coming away from the empty Poltimore and, suspicious, followed it.  When it stopped he asked to see the contents of the boot and there were the heads.  The thieves said they had bought them from someone in a pub but they couldn’t remember who or which pub !  The heads are now in safe storage until the room is ready to receive them back.

On another occasion a council officer found a fireplace dismantled by the front door awaiting transport.  That also was saved and it is stored in a secret location because it is probably worth more than the house.  Only four people know its location and they are not allowed to travel together !!

We admired a painting of Catherine Moore by Joshua Reynolds – sadly not an original. That is believed to be in the Tate.  This was produced during the last war for the Officers Mess when the building was taken over by the RAF and the original painting was put into safe storage.

The door frames had all been stolen but they have been returned.  And a large mirror was damaged by vandals – school kids, caught because one of them boasted !

The dining room was the next room to be visited and it hadso much damage.  This meant we could see that the building material used in the walls was local stone – volcanic purple – but the stone for the fireplace and the window frames had been quarried in Beer.   There had been a beautiful Tudor ceiling which the NHS removed when they had control of the building after the war.  The fireplace has also been stolen but it does mean that part of the original Tudor fireplace has been revealed with some magnificent stone carving above.

The courtyard was disappointingly small but we were assured that in due course it would be opened up to its former beauty.  The scaffolding supports a metal roof above the chimneys so it is gloomy but sadly the walls around the courtyard are not watertight enough yet to be exposed to the skies.

Money started to become a problem for the Bamfylde family at the beginning of the last century.  Food could often be imported cheaply which meant that profits were lower on the many farms rented out on the Poltimore land.  To alleviate the family's financial problems, land was sold off and the building was let.

Poltimore House became a school and then after the war the NHS took over the building. They spoiled many ceilings with new steel rafters (probably unnecessary).  But the kitchen was converted into an operating theatre – much liked by surgeons from other hospitals (most other operating theatres at that time were Victorian and not good for purpose).  It was particularly used for open heart surgery and the highly regarded Exeter Hip operation was developed here.

We had now visited all the rooms which were deemed safe for members of the public to enter so we had reached the end of our visit.  In closing Rikki explained that the Poltimore Trust were in charge of the building but the Friends of Poltimore (of whom he was a member) carried out all the day-to-day care.  The Friends are impressive with their enormous enthusiasm for the building and their work to improve it bit by bit and always delighted to welcome new members!

The whole tour was quite excellent and as we left around 1pm we all felt that we had had the most worthwhile and interesting tour.