Our own member, Dr Todd Gray, first gave us a detailed and interesting description and interpretation of fourteen ancient maps of Exeter. The Hooker map of 1587 assumed that the city was round and showed the outer wall in a circular shape. 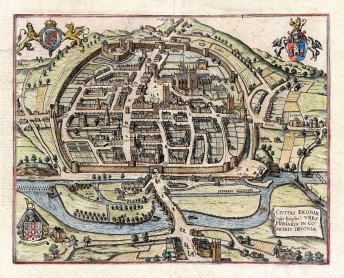 The famous Hogenburg map (left} dates from 1617. We then saw maps from 1740 onwards with vignettes around the borders revealing unusual features, such as workhouses, which are usually hard to locate today. For instance, where Waitrose sits today was once a workhouse !

Brickworks and other useful manufacturing sites were also often displayed around the edges of maps.  The Royal Clarence date of 1660 (though now disputed) was displayed on one.

Many later maps are copies of copies down the ages and often became not very reliable.  Originals are, however, valuable and expensive to buy nowadays.  An original 6 ft x 8ft map sold at auction recently for £5,000 !

Names of streets tend to change so it is interesting to see different maps.  For example some show the High Street as being right the way down to the southern end of the city.  Others show only the northern end as the High Street.  The conduit is often shown in different places and the shape of Cathedral Close with its seven gates changes a bit !  One problem with researching early maps is that they only showed street names.   House numbers were not included until around 1807.

In the 1720s and 1730s there was a strong cloth industry.  Fields of cloth racks were shown on the maps but, as the industry began to decline, they began to disappear.  Then, in 1750, the city council issued Corporation Maps.  These were big books of maps showing all the shops and other buildings, with small areas being reproduced on subsequent sheets in more detail.

In 1792 there began a marked “Age of Improvement” throughout the land but Exeter now had less money so there was not much building and certainly not outside our city walls.  While cities like Plymouth and Tavistock had mines to improve their economy, in Exeter merchants were not making much money. 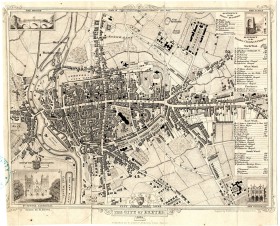 But then things began to change. The railway came and the City began to spread northwards.  People started to move into Exeter. Brown’s map (right) shows the recently built Bedford Circus.  Soon there would be no vacant land left within the city walls and sure enough later maps show that people were moving outside the city walls to St Leonards, Pennsylvania and St Thomas - where good sanitation meant they could escape disease, particularly cholera.  By 1840 those merchants who had lived over their businesses in central Exeter had all moved out leaving the poor squeezed in to highly unsuitable accommodation and suffering much squalor and sickness. 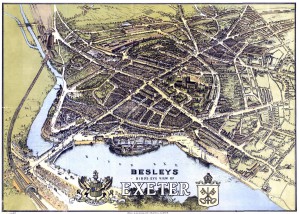 The next map (Besleys  -  left) still shows some greenery.  The railway was passing through and Exe Bridge was straightened out in line with the road up into the city.  St Leonards was expanding year on year and the Bishop’s Garden is shown as the biggest within Exeter.

At this point Chris Reed took over and explained that his company, Freeline Graphics, had developed display boxes such as the one in St Stephen’s Church in the High Street and in Tuckers Hall.  The interactive systems installed there allow people to explore at their own speed photographs and old maps on screen.  One can zoom in, move round, look for shops and businesses.

Chris showed us a series of maps which were produced between 1888 and 1937 and cover the whole city of Exeter.  We saw maps of Sidwell Street, Longbrook Street, Southernhay, South Street, Paris Street and Fore Street down to Shilhay. These were all very detailed with individual buildings clearly shown.  Todd commented “Who can’t be fascinated by the detail in these maps?” and praised Sue Jackson’s research exploring details on the history of some of the buildings.

Up to 1937 much detailed mapping was done for insurance purposes.  Those maps show the type of business in each shop and the fabric of the building.  Businesses are described as sausage makers, gin brewers, cat food producers and there is even the Shilhay Candle Works.  Picture houses and a skating rink appear on South Street, also a library. The 1930s maps are of particular interest because some of those residents are still alive and can often provide photographs and memories of the places where they were brought up.

Chris explained that his company, Freeline Graphics, plan to produce another of their interactive screens which will provide detailed information about the premises shown on these insurance maps.  The screens would be available in public places such as city council offices and the library where anyone could research (at the touch of a button!) details of any of the listed premises.  This massive undertaking needs a small army of researchers and Chris is asking if some of our members would volunteer to assist.  Todd would be in charge of training any researchers who were new to the field.