We were truly lucky in the gloriously sunny weather but even luckier with the excellence of our guide.  Alison Gordon took us first around the beautiful gardens  while entertaining us with the most informative, interesting – and amusing – descriptions.​ 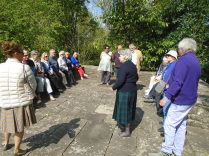 We sat on a low wall while Mrs Gordon showed us where the original Saxon Great Hall and Tower had been located.  These wooden buildings have, of course, long since disappeared.  She pointed out the deep drop down to the river behind us.  This meant there had been no need for a moat on that side – the river did the job for it !  Moats were, however, built on the other side of the property.

And we saw the garderobe in the wall, just a hole really on the corner of the wall, but we were told about the tunnel, too small for an adult, that a child was expected to negotiate with a rake to ensure the waste was cleared into the river behind us.

Mrs Gordon dated the castle back to 1106.  It was originally built as a motte and bailey castle by Richard de Redvers who was the first Norman Earl of Devon - or perhaps his son Badwin was the first Earl - history keeps changing !. Henry III stayed at the castle in 1250 and his second son, Edmund, married the Countess of Devon’s granddaughter in 1269.

In 1293 the Courtenays took over the Castle, rebuilt it in stone and enlarged it.

In 1495 Edward IV's daughter married William Courtenay.  This was a turbulent age and their son, Henry, was accused in 1539 of being implicated in a plot against Henry VIII.  His wife was an aunt of Henry VIII but that did not save him.  He was beheaded and their son, Edward, aged only 12, was imprisoned in the Tower of London for 14 years.

He was only released by Queen Mary in 1553.  She was reputed to be viewing him as a potential husband but he foolishly suggested he preferred Elizabeth !!  Out of this grew a rumour that he and Elizabeth were planning to overthrow Mary.  He was imprisoned, of course, and on release ws banished to the continent, never to return.

A certain Roger Giffard (1533-1603) made Tiverton Castle his family home. In 1645 during the Civil War Lord Fairfax, with an army numbering 7,000+, threatened to attack the castle. However, the Governor, Sir Gilbert Talbot, chose to defy Fairfax maintaining that he could, with his 300 men, resis.  But 200 (not unsurprisingly) ran away. Nevertheless, Fairfax was lucky when a shot hit the drawbridge chain and a party were able to enter and put a quick end to the siege.  Much of the castle was then demolished to prevent military re-use.

Evidently a nursemaid, holding a baby, watched the fighting from a window and a stray canon completely beheaded her – but the baby was fine !  A letter in a cabinet in the castle details this battle: the number of officers and men and the losses.  This was the only battle in the castle’s 900-year history.

We visited the remains of the tower.  From its top it would have been possible to survey the whole countryside.  There would have been wooden staircases and floors – we could see where the joists had been.   By our standards it might have been uncomfortable living but with painted walls and hanging tapestries it would have been very colourful. 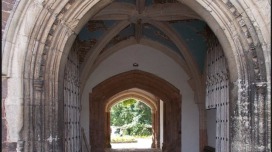 From there we walked to the main entrance archway which showed signs of both 14th and 15th century building.  Mrs Gordon explained how it was only when the plaster work on one archway was cut back to redecorate that they discovered the bricks were made of stone – as used in Exeter Cathedral.   It now seems a shame to re-cover them with plaster.

Through the archway we could see an ugly commercial property called the Works.  That had in fact been the castle outworks and beside it is an alleyway which was once a tilt yard.  This was known as “Hit Or Miss Alleyway” and then, inevitably, “Hippopotamus Alley”! 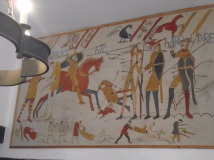 Inside the castle we visited the Guardroom and admired a copy of a portion of the Bayeux tapestry.  Mrs G pointed out an example of early recycling along the bottom of the tapestry.  Soldiers in those days, if they survived a battle, helped themselves to any armaments and armour lying around – for their own use in the next battlle. 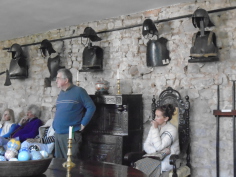 In another room there is a fine collection of Civil War arms and armour. The armour had dents, not from battle but from testing when new.  It was important to check that they could resist bullets.  Armour for the back did not need such trials – you don’t turn your back on the enemy !

The articulated helmets with nose guards were a Turkish adaptation (from the Far East).  We tried some on (right) and handled some canon balls – unbelievably heavy. 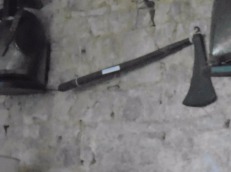 We saw a beheading axe (left) and a very ugly pikestaff.  This was used against the cavalry, its long shaft with the blade on its tip causing much damage to both rider and horse. Much of our language contains references to those times, such as “plain as a pikestaff”. 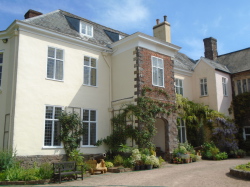 Walking through the castle was a fascinating history lesson.  It seemed that every room represented a different period in history right the way through to the beautiful large Georgian rooms – an elegant dining room, a library and drawing room - now occupied by the Gordons.

It was now lunch time and we all thanked Mrs Gordon for a truly excellent and fascinating tour and some of us, having had the foresight to bring a packed lunch, sat in the sunshine in the beautiful gardens to eat !