BEHIND THE SCENES AT THE GUILDHALL 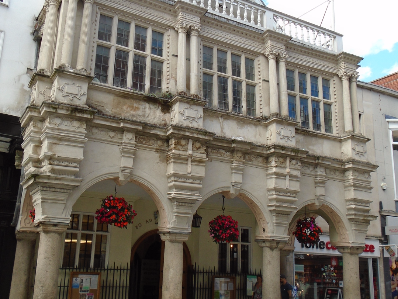 Over 50 people attended the three tours of this building !  We were given a potted history of the building; deeds date back to 1160, the infamous Judge Jeffery presided over assizes here.

Many petty criminals stood in the dock on the ground floor hall and were committed to transportation – or death.  We saw an 1829 news cutting of considerable length listing all the cases from just one day.  They really worked fast to get through all the cases!

The solid oak entrance door completed in 1593 took over two years to construct. It has a central smaller secondary entrance in the middle to ensure that marauders cannot charge in with weapons.  The mayor would get down from his carriage and step through the door.  Then it would be shut behind him.

The hall’s panels are all individually hand carved and uniquely different. The windows of the hall were blank (perhaps originally had no glass at all) and over time mayors and dignitaries have paid to decorate a window.  When they ran out of empty window space in 1974, wall plaques to mark our various mayors were installed.  In one corner is a plaque for all soldiers who have died in conflicts since the end of World War II.  There is also a large marble plaque in the outer lobby honouring those who died in the Boer Wars.

The central chandelier by Thomas Pyke in 1789 cost £28.13.0d according to a receipt found inside it.  The hanging lights need scaffolding to change a lamp.

We saw the oil painting of Henrietta, daughter of King Charles I.  Henrietta was born in Exeter but escaped to France.  We also saw the painting of Benjamin Heath, a Town Clerk who secured the repeal of the cider tax– hence very popular here in Devon.

The ceiling gargoyles are in fact dogs. Except at the very end is a monkey, evidently in homage to a monkey employed by scaffolders in 1466 to spring down and collect dropped tools !  There is also a carving of a cat curled up in the rafters.>

The outer lobby is a later addition and was built with a dungeon for the serious criminals.  The entrance was in what is now the Turks Head. That dungeon can only now be accessed through a trap door in the front office and someone with a ghoulish sense of humour has reminded us how horrific it was down there!   Here they awaited hanging or transportation.  If the latter, they were taken to a ship moored inTopsham, which would take them to Bristol where they would be loaded onto a larger ship for the 9-month journey to Australia (some men were allowed to return at the end of their term but the women had to stay for ever - to colonise the country !).

Originally, the hall had an earth floor.  In 1863 it was paved in stone and slate tiles. During the war the hall’s floor was replaced with Canadian redwood to enable the room to be used for dances – to keep up the morale of the citizens.  The gallery was used by a Glen Miller type band and Canadian soldiers loved it.

Meetings are still held in this room with the mayor seated in the centre of the raised area and senior council officers behind him/her.  Conservative, Labour and Independent members face them.  The Mayor is elected each year from the council members – it is a demanding job.  He/she may be expected to attend 500 functions in one year!

Out at the back we saw the small holding rooms for petty prisoners - twenty people in a room hardly big enough for a camp bed !  No glass in the window, water jugs through a hole in the wall and occasionally bread. A bucket for a toilet.

Upstairs the Jury’s Room would have had a large table for the 12 jurors to sit around and decide a prisoner’s guilt, then troop down the stairs to inform the judge of their decision.   The beautiful wall carvings were installed in 1934 and came from St Katherine’s Priory. The police station was outside the window until moved to Heavitree.   The room has many uses now including weddings and it is here that all the paperwork for the poll tax was administered.

In 1497 Henry VII gave Exeter Council his sword and hat.   The current hat was made in 2009 by the same company who produced a copy in 1700.  It is no longer worn but is carried in ceremonies on a cushion.

We saw the four waits chains worn by the musicians/janitors who locked the city walls at night and attended to the mayor’s security.  Each new mayor would select his staff by handing them the chains but in the 1950s they were deemed to be irreplaceable and too fragile ever to be worn again.  Their modern day security staff do everything they did except for the music and the city wall keys.

The Mayor’s Chain (left) is of gold and was presented to the city in 1874 and we saw the four maces (only silver gilt!). There is also a wooden Maori mace presented in 1949.

Admiral Nelson’s sword is here.  Evidently he had a girlfriend in Exmouth so was a frequent visitor here.  He was given the freedom of the city in 1801 but died in 1805.  The sword was inherited by his family but presented to the council in 1934.

There is a painting of General Buller (without a traffic cone on his head!) whose sword is encrusted with jewels.  There is also a hard-to-read copy of the Magna Carta on the wall.   It is one of ten copies which were distributed to all major cities after an original succumbed to a fire in 1783 and a copy of St Johns Seal was given to the City by the Law Society in the University.

The picture of Wellington was originally a painting of Napoleon on his favourite horse Marengo.  After Napoleon’s defeat the painting was defamed by removing his face from the picture. An Englishman found it and did the Georgian equivalent of a photoshop on the painting!  Very dramatic it now looks with Wellington’s face instead of Napoleon’s.  However, the sword is not a cavalry sword, the emblem on the horse and Wellington’s epaulettes are all French.  The badge, however, is Wellington’s …

Up another flight of stairs was the Lord Mayor’s room and here he/she meets and greets.  We were shown memorabilia from the various towns across Europe with which Exeter is twinned.  There are also various seals including one for the rugby world cup and there is a name plate from HMS Exeter and two rather dramatic paintings of the east and west walls, which had to be locked every night.  We saw the keys to the gates - copies of these are given to anyone given the freedom of the city.

SO MUCH SILVERWARE … it is difficult to describe it all. Bowls and plates and tea urns,  scissors for important openings – one used by Callaghan for the opening of the connection of the M5/A38 and another used by Princess Alexandra for the opening of the Guildhall Shopping Centre – spoons of Exeter silver and a large silver cup which goes to the Exeter race course every year for presentation to the owner of the winning horse.  They keep a replica; the original is returned to the Guildhall.