On 11 February, Christine Trigger transported 40 members back into Victorian Exeter by means of the excellent paintings by Sydney Endacott.  Sadly, many of the buildings he painted were lost in the blitz (Exeter was a jewel and we have destroyed it, boasted German radio at the time) but some still exist.

Christine took us through Endacott's life and showed us slides of his superb canvases of the Exeter area. His painting of the meeting room at Tucker’s Hall graces the front cover of Christine’s book (members will remember this room from having our own meeting there on 12 June 2014).

We discovered that the building now known as The House That Moved was not exactly as it had been in earlier times.  Endacott painted it when it was still located between Frog and Edmund Street and, when the Council moved it to make way for the Inner Ring Road, the 100 yard move took four days! They added a window or two as well.    Christine said, in the words her mother used, “They tarted it up !” 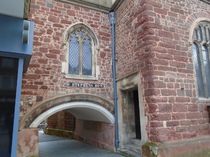 Christine showed us Endacott's painting of St Stephens Bow and told us that until about fifty years ago, men were expected to raise their hats when they walked under the arch !  This was not because the “ceiling” was so low but as a mark of respect for the altar of St John the Baptist which was above.  The church of St Stephens, in need of space in a crowded city, had extended itself out over the street to provide a space for their altar! 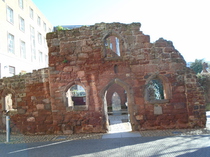 The Catherine Street entrance to the almshouses today, with the chapel behind.

We saw a beautiful painting of St Catherine’s Priory, and Christine pointed out the men chopping wood in the foreground.  They were ex-prisoners and the chopped wood they could then sell.  We saw how cheek by jowl all the buildings were, washing hanging out to dry from a window, all very different from today’s sad ruins, left as a memorial to those who died in the Blitz. 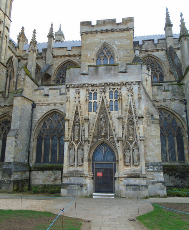 Endacott’s painting were not just secular.  He painted the north tower of the Cathedral and Christine particularly drew our attention to the empty alcoves.  These were only filled after Endacott’s death with slides representing St George (patron saint of England, Portugal and all soldiers) at the top, with either side of him, St Denis (Patron Saint of France), St Joseph, (patron saint of Belgium and, not unnaturally, carpenters) and bottom left, St Vladimir the Great of Russia, born 955, and at bottom right is St Ambrose (patron saint of Italy, beekeepers and domestic animals) while immediately on the right and left of the doors are the twin saints of Europe, St Cyril (who invented the Cyrillic alphabet) and his brother St Methodius.

Sidney died on 4 November, 1918, just eleven days before the armistice was signed.  He was only 45 but had suffered lifelong ill health and, fearing he might not last to provide for his family, he had taught his wife, Lily, to paint.  She lived until 1957 and did indeed support herself and her son with the skills her husband had taught her.

Endacott bore testimony to a beautiful Exeter.  His paintings were reproduced as post cards but they are hard to acquire these days.    We were lucky that Christine had collected so many over the years and that she then shared so many of these enchanting pictures with us, just a few of which are described above.

NOTE: A video of the transfer of The House That Moved can be seen on http://www.dailymotion.com/video/xj2iio_house-moved_travel