Summary of talk by Malcolm Grigorey

The line had many complications following the river valley – flooding washed the line away at times – and steep hills necessitated tunnels. Tight bends also caused problems particularly for main-line trains diverted from the coast during WW2 to escape bombs. The trains could only manage the bends if the coaches were linked but the connecting corridors had to be closed.

At one point the railway company were forced to build three bridges over a bend in a leat and its overflow channel  because the landowner refused to allow the leat to be diverted.

For many decades the railway transported materials from various mines and quarries to Exeter and the Newton Abbot line for onward transport to industrial plants and factories far and wide.  Animals were taken to market and passengers used the line for work, shopping and play.  But "progress" - the Beeching Axe - decreed changes.

Christow Station, amongst others, was sold after closure of the line in 1958 and converted into a charming home.    This photograph, taken from a road bridge, shows a lawn between the two platforms.

Longdown Station is on private land owned by the Culver Estate.  It was restored in the 1970s by an enthusiast with the permission of the landowner who then decided not to open it to the public - even to photograph it special permission had to be obtained!   One of the two disused Longdown Tunnels became a mushroom farm with gates (closed to keep out the light) and was also used to store boats from the Maritime Museum.  Unfortunately some of these were destroyed when part of the tunnel collapsed.   Others were removed and the tunnel was sealed. 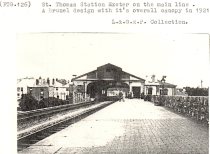 The staff on the line were very much part of the community they served and it was near Longdown that the guard used to throw the evening paper over a gate for his farmer friend to collect!  On Saturdays the driver of the last train of the day blew his whistle as he left St Thomas Station for his turnaround at St Davids.  The whistle warned all the drinkers to empty their glasses and scramble up to St Thomas to catch the train on its return leg so that they could be transported safely (if somewhat inebriated!) back to their homes in the Teign Valley.