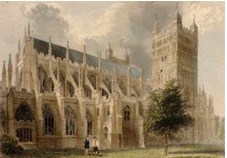 Conservation & Restoration of the Cathedral.

A talk by Peter Dare

Work began on the (new) Exeter Cathedral in 1112 using pale sandstone quarried at Salcombe Regis. It was only about 270ft (82m) and lay between the two tremendous transept towers built between c1120 and c1170 and still surviving today. The ornamented towers are over 140ft (44m) high and each tower is slightly different although both were originally capped with squat, four-sided spires.

A century later the cathedral was rebuilt and extended eastward to include the Lady Chapel, ambulatory and the chapels of St James and St Andrew. The unusually low height of the vaulting was dictated by the retention of the two Norman towers. Much of the vaulting stone is from Silverton. Some of the bosses are of Ham Hill stone. This stone is very hard and heavy. The delicate decoration on the bosses would have been carved at Ham Hill and the finished bosses were brought down by horse and cart.

The Minstrels’ Gallery and the lower two tiers of the image screen on the west front were added between 1342 and 1360. We can still see today how the new West Front obscured the lower part of the earlier tall window. Beer stone, which is very fine, was used and was probably painted with lots of gold and silver – it must have been amazing.

The masons were not particularly purist about what stone they used as it was all going to be painted. The paint probably protected the stone while it lasted. Much of the stone for the cathedral would have travelled by boat but when the roads were improved they enabled transport of such heavy loads. Eight horses were needed to pull one block on a cart and there were stables at Newton Poppleford for a stopover.

The old mine at Beer was found and reopened in the 1970s specifically to provide stone for restoration of the Cathedral. The stone was brought out using pulleys in much the same way as in ancient times. The mine is now a tourist attraction and the ancient chisel marks dating from 1400 can still be seen on the old wall.

Peter Dare pointed out that mason’s tools have remained largely unchanged through the centuries. Their hammers are longer than conventional hammers and Peter pointed out that the most most important tool has always been string - used to ensure verticals and even to describe circles.

In Victorian times much restoration, rather than conservation, took place. Scaffolding was erected around the South Tower with poles going right through the tower and out the other side. It is difficult to know where the stone they used originated because, with the advent of the railways, it could be brought in from all over the country. Steel was used to support the building and the cloisters were rebuilt. Unfortunately, the Victorians thought plain stone was preferable to its being painted so they removed the render and plaster and pointed up the stones in many old churches, including Exeter Cathedral. Now they all leak! Though much of the paint may have been stripped under Henry VIII.

By the 1970s the Cathedral had become very black inside from coal fired stoves so it was cleaned with water using very fine sprays. Some traces of the original paintwork were thus revealed.

Nowadays, conservation rather than restoration is the norm. But knowing when to stop is the problem. For instance, statues dating back to the 1300s, while looking a bit worn, are now protected by being checked and cleaned every six years. So their condition will not therefore deteriorate further.

The teak roof is very heavy and all the gutters are lead and the slender walls and windows with flying buttresses are all that holds the roof up. The pinnacles are not just pretty – their weight keeps the buttresses down!

Many of the pinnacles needed restoration and partial replacement and there is now one with a queen’s head (carved by Peter Dare) and another with the pipe-smoking dog who famously used to visit the cathedral with his pipe on a daily basis.