Full details of the November 2015 newsletter will be available shortly.  The first few pages are below.﻿ 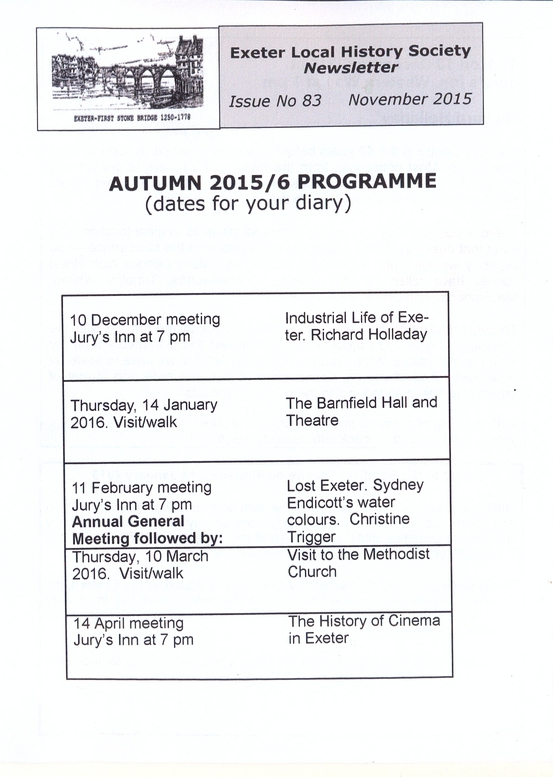 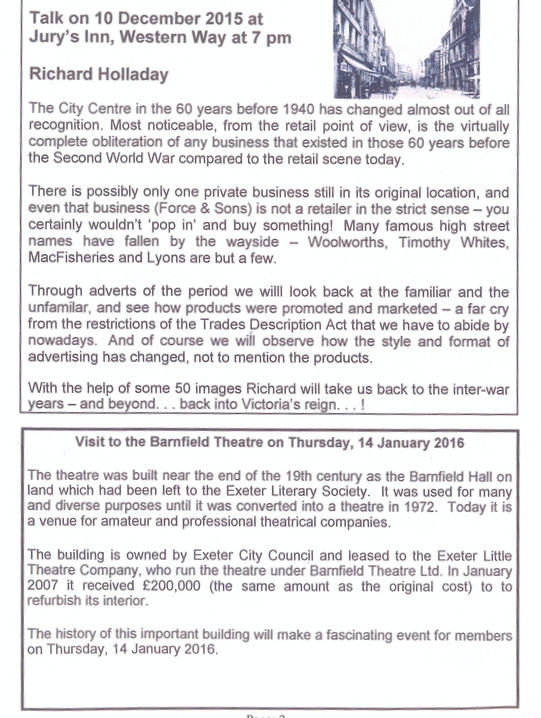 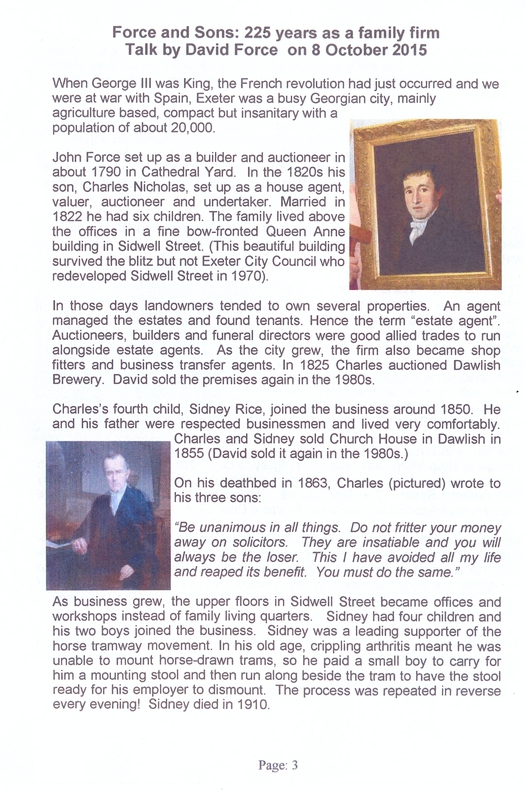 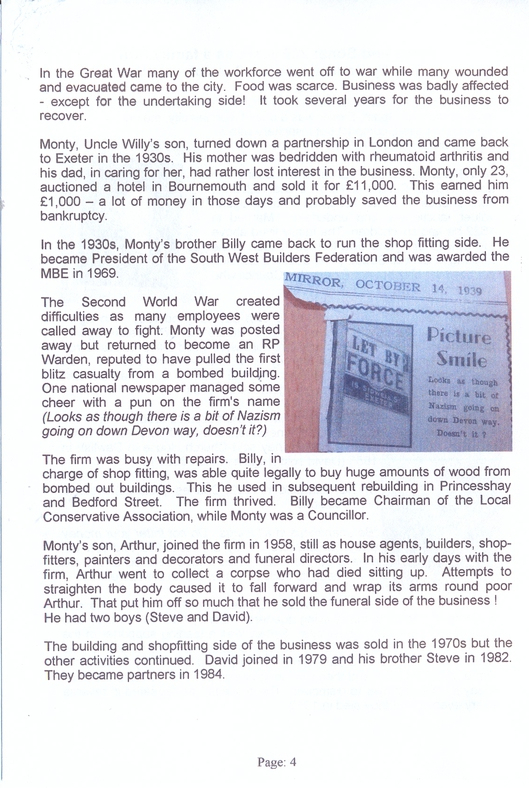 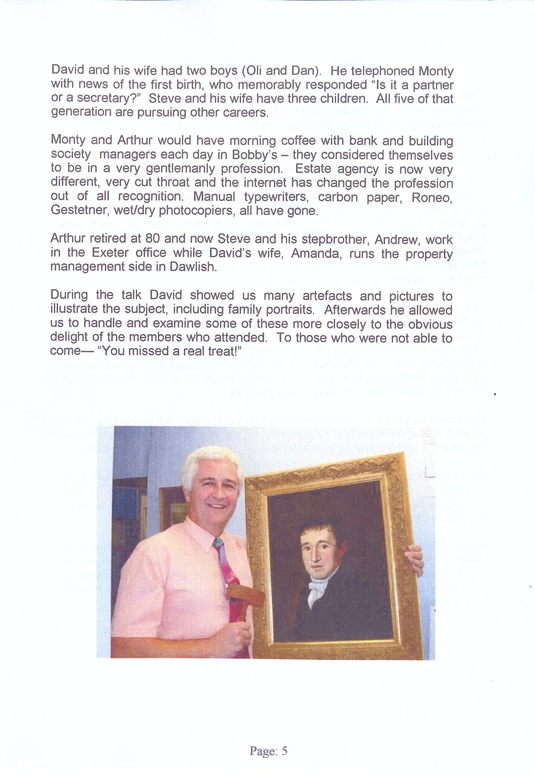 VISIT TO THE EXETER MOSQUE

This 14 November event avoided the wet weather and the Christmas shopping crush by combining a visit to the Exeter Mosque with a slide-illustrated talk on the links between the West Country, including of course Exeter, and the Middle East.

The leaders of the Moslem community, including their “Imam” gave us a very warm welcome, including refreshments and a guided tour of the magnificent and relatively recently-built Exeter Mosque. They explained how a growing community of Moslems from Europe, as well as other parts of Britain, has expanded here in Exeter over a number of years and progressed from worshipping in two converted domestic  buildings to the development of the new Mosque. This was opened only a few years ago, having been built on the site of some of the adjacent school’s original buildings, swimming pool and grounds.

We were shown the multiple shoe-racks and hand and feet washing facilities, separate ones for men and women, which are part of the Moslem ritual before attending prayers in the main hall. Modern Moslem women have their own stairs to an elevated balcony with discreet viewing screens overlooking  the main Mosque Prayer Hall, which faces Mecca, where the men pray, alternately standing and kneeling prostrate on the carpeted floor and led by their “Imam” through ritual prayers.

The Imam gave us a most interesting talk and answered questions.  This proved to be an excellent opportunity to explain to our members many important – and frequently misunderstood – aspects of the Muslim faith.

After refreshments, we sat down to hear a talk with slides prepared by Frances. A number of members of the Moslem community joined us and subsequently expressed great interest in the talk and our Society, even to the extent of asking for membership details.

Later, Malcolm had a discussion with the Imam on the subject of “ISIS”.  He and his believers are deeply distressed by and concerned about them and their activities which are not “Moslem” at all!! A number of the Exeter Moslems, led by the Imam, joined the recent “March of Peace” from Exeter Cathedral. 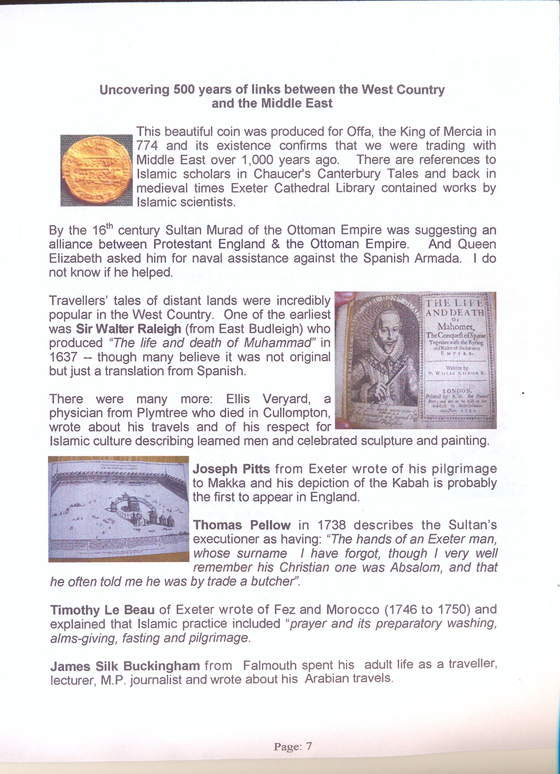 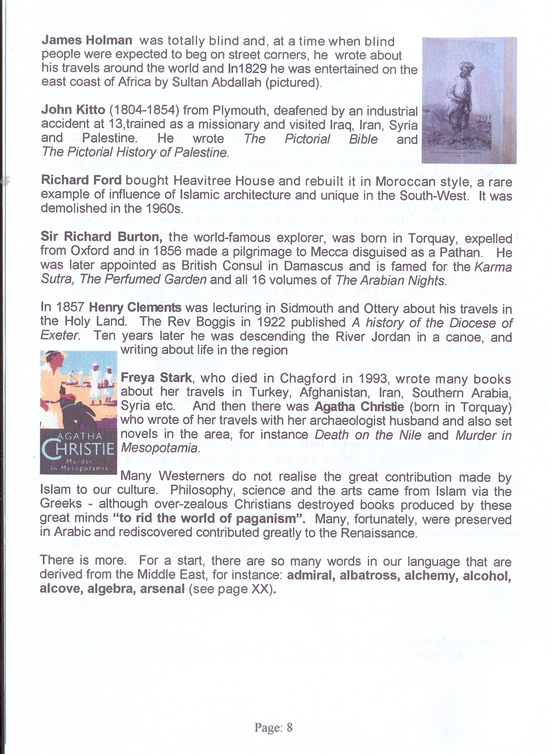 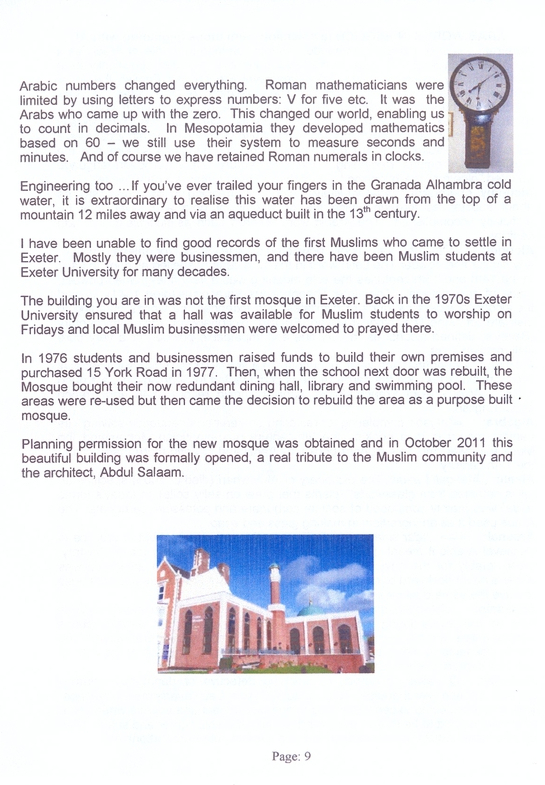 ARAB WORDS IN ENGLISH (a selection from those beginning with A)

Admiral:  أمير amīr, military commander. Amīr is common in medieval Arabic as a commander on land (not sea). In medieval Latin it is recorded specifically as a Muslim military leader or emir.  In late medieval French and English the usual word-forms were amiral and admiral. The insertion of the letter 'd' was undoubtedly influenced by allusion to the word admire, a classical Latin word.

Albatross:  The medieval Arabic source-word was الغطّاس al-ghattās which literally meant "the diver", and meant birds who caught fish by diving.  The albatrosses are large diving seabirds that are only found in the southern hemisphere and the Pacific Ocean regions. Beginning in the 17th century, every European language adopted "albatros" the 'b' having been mobilized from Latinate alba = "white".

Alchemy, chemistry:  الكيمياء al-kīmiyā, alchemy, meaning in particular "studies about substances through which the generation of gold and silver may be artificially accomplished". The Arabic word entered Latin as alchimia in the 12th century.

Alcohol:  الكحل al-kohl, very finely powdered stibnite (Sb2S3) or galena (PbS) or any similar fine powder.The Latin word in the 13th century spelled alcohol. In Latin in the 14th and 15th centuries the sole meaning was a very fine-grained powder, made of any material.  The writer Theophrastus Paracelsus (died 1541), viewed the alcohol powders as kinds of distillates, and extended the word's meaning to distillate of wine The biggest-selling English dictionary of the 18th century (Bailey's) defined alcohol as "a very fine and impalpable powder, or a very pure well rectified spirit."

Alcove:  القبّة al-qobba, "the vault" or cupola. That sense for the word is in medieval Arabic dictionaries, and the same sense is documented in Spanish alcoba around 1275.   Alcoba begot French alcove, earliest known record 1646, and French begot English.

Algebra:  الجبر al-jabr, completing, or restoring broken parts. “equation-solving". Its earliest record is in a book by the 9th-century mathematician Mohammed Ibn Musa al-Khwarizmi. This algebra book was translated to Latin more than once in the 12th century

Alkali: القلي al-qalī | al-qilī, The dictionary of Al-Jawhari (died c. 1003) specifies al-qilī is obtained from glassworts" (plants that grew on salty soils). In today's terms al-qalī was mainly composed of sodium carbonate and potassium carbonate. The Arabs used it as an ingredient in making glass and soap.

Arsenal:  دار صناعة dār sināʿa, literally "house of manufacturing" but in practice in medieval Arabic it meant government-run manufacturing, usually for the military, most notably for the navy. In 16th century French and English an arsenal was either a naval dockyard or an arsenal, or both. In today's French arsenal continues to have the same dual meanings as in the 16th century.

Assassin:  حشاشين ḥashāshīn, an Arabic nickname for the Nizari Ismaili religious sect in the Levant during the Crusades era which carried out assassinations against chiefs of other sects, including Crusading Christians, Generalization of the sect's nickname to mean any kind of assassin happened in Italian at the start of the 14th century and French and English in the 16th century.

Average:  عوار ʿawār, a defect, or anything defective or damaged, including partially spoiled merchandise. 12th century Genoa Latin avaria meant damage, loss and unexpected expenses arising during a merchant sea voyage when some of the goods had to be thrown overboard to make the ship lighter and safer.  Then all merchants whose goods were on the ship were to suffer proportionately.